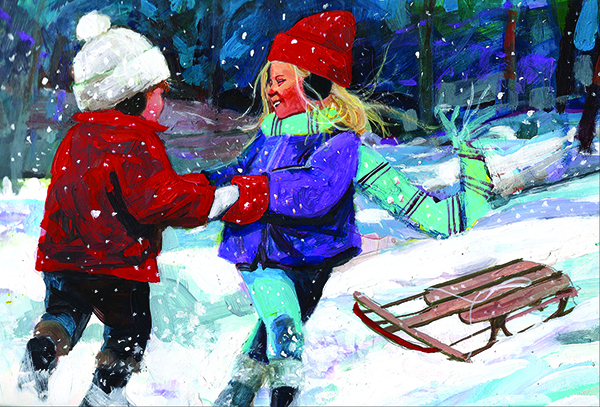 Editor’s note: This is a fictional story written by Tribune newsroom staff. Each person took a turn writing a portion of the story. We wish our readers a merry Christmas and a happy New Year.

The Kringle family of the little town of Hayward, Minnesota, decided this Christmas was going to be different than any other year.

Instead of turning up holiday tunes and decorating the tree in the living room, the family was going to take a trip to a cabin in northern Minnesota.

The goal of the trip was to spend quality time together without technology.

Christmas Eve morning finally came, and the family stuffed its four suitcases, a pile of homemade gifts and its 100-pound golden Lab, Marley, into the car and waved goodbye to its home.

The two children, Jenni, 8, and Stephen, 6, were buckled safely in the backseat with Marley between them. Mom shoved a Christmas CD into the player while Dad set the GPS.

The first stop was going to be for lunch at a mom-and-pop café along Interstate 35.

Without their handheld video games to keep them occupied, Jenni and Stephen were quickly sick of traveling. Mom suggested playing the license plate game.

It was tough to start, though. The only license plates they saw were from Minnesota. That made the goal of seeing all 50 states seem like a large task.

The license plate game proved effective for Mom because it put the kids to sleep. Jenni dreamed of a talking reindeer that was full of Christmas cheer, but Stephen didn’t dream of anything because he was angry that he wasn’t allowed to bring his arsenal of video games.

Later that evening, the Kringles arrived at the cabin east of Lake Bemidji nestled in a pine forest. Dad peeled a groggy Jenni off the seat and carried her inside like a fireman, while she mumbled, “Silly reindeer, you can’t talk.”

After a supper of beans and hamburgers cooked on a small propane grill, Dad gave Marley a fresh rawhide bone and the family got ready for bed. That’s when Stephen heard a knock at the door. Marley, who was wagging her tail wildly, was the first to rush to the cabin’s entrance. Stephen followed and cracked the door open an inch, letting a whisp of icy air inside.

No one was there. Dad and Mom said they didn’t hear anything, but Jenni said she heard the knock as well.

After Dad and Mom fell fast asleep, the knocking started again. Marley was chasing her tail in front of the door, and Stephen and Jenni crept close to the door on their hands and knees. Again, no one. However, Jenni saw a rabbit a few feet outside the door and decided to get bundled with her snowboots and puffy purple winter jacket to get a closer look. She grabbed their sled.

They knew they shouldn’t go outside, but if Jenni was going, Stephen just had to go, too. He put on his red coat, grabbed a spoon and a half-eaten can of beans to munch on and walked out the front door after her.

Once the siblings stepped outside, they heard a deep, cheerful voice. Stephen stopped walking and his jaw dropped. His can of beans fell to the ground, and the utensil clanged on the sidewalk.

The voice was coming from a reindeer.

It was speaking to a little fellow with curly orange hair wearing a green coat. He was smoking a pipe, rubbing his chin and contemplating something. Then he spoke.

“Hi dere,” he said. Was that a Wisconsin accent? Or Minnesotan? “Mind if I walk in da front door?”

Jenni knew this was an elf. Stephen was curious and afraid all at once.

“My reindeer friend and I were talking about how da deliver dese presents from da big guy,” the little man said, dragging a bag of presents from behind a tree, “We were worried aboot how da get down da chimney.”

“You are full of questions, little one. Santa Claus travels da world and cannot get to every home. He gets a little help from da older elves like me,” he said, pausing to draw from his pipe. “I work in Da Nort Woods. My associate here is a reindeer named Mortimer.”

“Yes,” the reindeer said, with his deep voice. “My name is Mortimer. I’m not one of the famous reindeer. I’m a backup.”

Mortimer continued. “You have to promise not to tell anyone.”

“Ooofda here and I live in Boulder Junction, Wisconsin, most of the year. We work on a seasonal basis, so we go to the North Pole around Christmas, then we’re off for the year. We just do deliveries, none of that toy-making stuff,” Mortimer said. “But we have another problem, too.”

The kids were wide-eyed. The elf and reindeer looked at each other.

“No. I mean, yes, but it’s spelled with three O’s, for extra emphasis.”

Stephen was getting cold. “So why can’t you go down the chimney?”

“Our problem is we are oot of da magic dust,” Ooofda said. He stepped toward Stephen, closed one eye, took a drag of his pipe and with his one open eye, looked right at Stephen. “We are without our technology, Stephen, and it’s up to you to save Christmas, not only for your house, but for all Da Nort Woods.”

“Me?” Stephen asked. “How will I save Christmas? I’m just from little ol’ Hayward, and I don’t even have my iPad! I can’t look up ideas on the Internet.”

She thought about her dream earlier that day. There was a talking reindeer in that dream, and he looked an awful lot like Mortimer. She remembered seeing a small, metal key tied around the neck of the reindeer.

“Was it a sign?” she thought. “What was that key, and where did it come from? Would it let elves into homes to deliver presents?”

“Is there a key?” she blurted out to Ooofda, Mortimer and Stephen.

“How did you know about dat?” Ooofda said. “One hundred years ago when we elves got low on da magic dust, we would use a key and then save what little dust we had until we got back to da North Pole. Santa told us to just close our eyes and whisper ‘magic key,’ and da key would appear before our eyes.

“We used it any time we ran low on da magic dust, until one day a naughty elf got da key and hid it. Legend has it, he buried the key right …” he paused. “Right next to your cabin.”

“But we can’t dig. The ground is frozen,” Jenni said.

She turned with her back to her brother and new friends and closed her eyes.

She thought back again to the dream from earlier that day.

“Where exactly was Mortimer standing in the dream? Where did he get that key?” she thought.

Next to Mortimer was a small, shiny gold box with a bow on top. Next to the box was a tree with a secret compartment in the front that opened like a door.

“The box came out of the tree!” she thought.

She looked around and found a tree on the other side of the cabin that looked strikingly similar to the tree from her dream, only larger.

“Come here, you guys!” Jenni said. “I think I might know where to get the key.”

She ran to the tree, and the others followed. Right in the front of the tree, carved in cursive, she read, “Remember the reason for the season.” Below it, was a small knob. She pulled and pulled but could not get the door to budge.

“Stephen, you try it,” she pleaded.

As Stephen grabbed the knob and pulled it outward, Jenni closed her eyes again and whispered “magic key.”

With a pop, Stephen flew back with the knob in his hand and landed in the snow. The small door opened, and inside, there was a glowing gold box. Jenni walked toward the box, pulled it out and lifted off the top.

Golden smoke billowed out, and sitting on the bottom was a key just like her dream.

She showed it to Ooofda and Mortimer. “Is this it?”

“I can’t believe it, but I think you have done it,” Ooofda said. “You have saved Christmas!”

“And we did it on our own,” Stephen said. “Who needs iPads!”

The brother and sister waved goodbye to Ooofda and Mortimer as they walked back inside the cabin with smiles on their faces.

The elf and reindeer disappeared before their eyes.