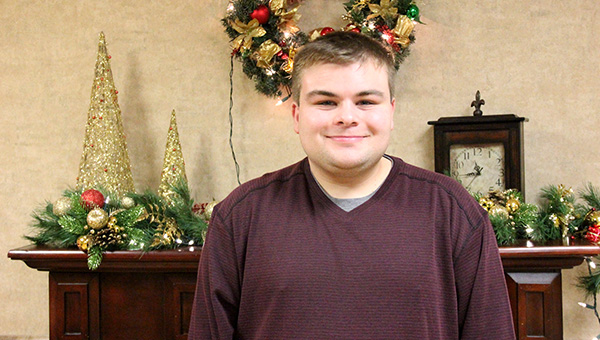 “It was more of a celebration of his life,” Travis said. “I liked how they didn’t dwell that it was the anniversary of his death.”

The chances of getting to attend the event were slim. There were only 5,000 tickets to the event in Dealey Plaza, and 2,500 of those were only available to Dallas residents. 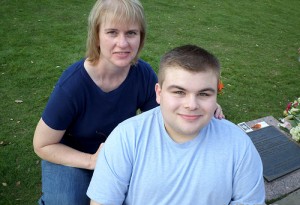 Dawn and Travis Drescher stand by the plaque that is in the grass by the grassy knoll that states that Dealey Plaza has been designated a national historic landmark. –Submitted

Travis, a history major and junior at Bethany Lutheran College, has studied the Kennedy family quite a bit and knowing last summer the event was to happen he went online and entered to win tickets for his mom and self.

By Oct. 10 the two found out they would be going to the celebration.

“I really thought there’s no chance,” Travis said. “I couldn’t believe it. I was kind of speechless at first.”

To prepare for the trip, Dawn watched specials on TV about the assassination to help her remember the stories from 50 years ago. Travis said he watched them when he had time between schoolwork.

There was a tolling of the bells in which 32 churches participated. The U.S. Naval Academy Men’s Glee Club performed and an invocation was given by a bishop from the Catholic Diocese of Dallas. A flyover salute was planned, but because of rainy weather, it was canceled. 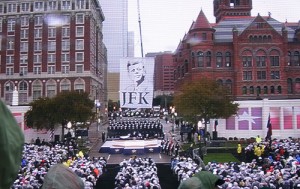 Travis Drescher took this photo Nov. 22 while he was at a celebration honoring President John F. Kennedy, who was assassinated 50 years ago at Dealey Plaza in Dallas, Texas. –Submitted

Around him Travis said people were seeing the rain as a symbol of the tears of the nation falling on Dallas that day.

“It was surreal,” Travis said. “It was kind of hard to imagine I was in the spot that 50 years ago he was shot.”

Hill, who has written books about the assassination, held a book signing and Travis and Dawn went to that, too.

Travis said he was able to shake his hand and told him he was from Albert Lea. Hill said he knew where that was because he went to school at Concordia-Moorhead.

“To shake his hand was special, too,” he said.

Also on their trip to Dallas, Travis and Dawn visited Parkland Hospital where Kennedy had died, visited a museum where Lee Harvey Oswald’s gun was found and attended a memorial put on by the Dallas Police Association for Tippit.

At the memorial, Marie spoke about her husband. Because a flag was never presented to her from her husband’s coffin, there was a flag-presenting ceremony.

“It was hard to believe,” Travis said. “It was humbling.”

He said the trip to Dallas has made him more knowledgeable, and he is excited to share with others. To be in Dealey Plaza where the assassination happened and hear firsthand from people who were present also made it more real for him.

“Something about it is really fascinating” he said. “I guess it’s because it’s only been 50 years and there are still people alive that either witnessed it or remember it.”

His interest in history began about the fifth grade because of his teacher, Tom Gaudreau. He said Goodreau made the subject interesting. And, social studies teacher Jerry Bizjak influenced Travis’ love of history in middle and high school.

It was in school that Travis first learned about the Kennedy assassination, and he has been researching it ever since.

His dream job would be to work in a Kennedy museum in either Boston or Dallas.

Interesting fact: Travis has been to six countries.