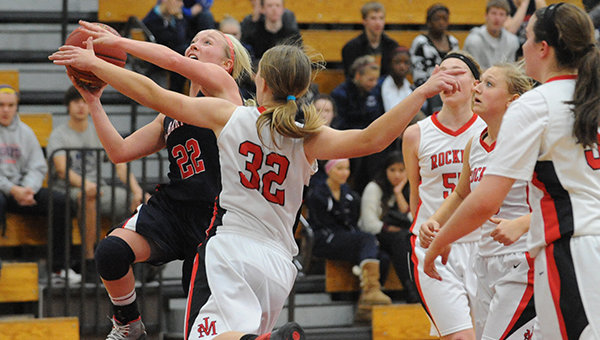 The Albert Lea girls’ basketball team was the underdog against Rochester John Marshall, but that didn’t make a one-point loss in the final seconds any easier to swallow.

The Tigers fell to the Rockets 63-62 Thursday night at home.

Albert Lea trailed Rochester John Marshall by six to eight points throughout the game, until the final minutes, when things started to get interesting.

After a storming comeback led by senior guard Bryn Woodside, the Tigers still found themselves trailing by one point with less than a minute left. Megan Kortan was fouled and went to the charity stripe for two shots with 54 seconds left. She made the first and missed the second.

The Tigers grabbed the rebound on the miss, and the ball found its way back to Woodside, who was fouled. Woodside then uncharacteristically missed both free throws and the Rockets went down in transition and scored a layup to take a two-point lead.

“This game is going to prepare us for a section game later on in the season when it’s loud, close, intense and physical,” Hugstad-Vaa said.

After an unsuccessful attempt to tie the game, the Tigers were forced to foul the Rockets with seconds left. The Rochester shooter missed the front end of a 1-and-1, which gave Albert Lea one last shot.

The Tigers’ Sydney Rehnelt was fouled with 0.6 seconds left and sent to the line with an opportunity to tie the game. Rehnelt swished the first attempt but the second shot rimmed out. Rehnelt was the Tigers’ leading scorer with 20 points. She drained five three pointers.

“There are a lot of little things we can work on,” Hugstad-Vaa said. “And I know that at the end the pressure is on the kid who has the opportunity to score, but we had plenty of opportunities before that. So hopefully we take this lesson and we learn from it, and then we become tougher next time we play.”

Hugstad-Vaa said that even though the loss stung right away, it would help the team build character moving forward.

“A lot of people in the conference didn’t think it would even be this close,” she said. “For our girls to know that we can be smarter and out-play bigger teams is the biggest lesson.”

Despite giving up a couple inches of height at almost every position, the Tigers were very stingy on defense. Rochester John Marshall spent most of the second half working the perimeter and had trouble getting past Albert Lea’s zone.

“We knew a lot of them weren’t shooters and we knew exactly what they were looking for, to pound it inside,” Hugstad-Vaa said. “I think we did a good job of adjusting to that in the second half and forcing their outside people to make mistakes and have turnovers and missed shots.”

The Tigers went 2-4 in 2013, and they will be back in action Dec. 3 at home against Rochester Mayo. Hugstad-Vaa said she has seen a lot of improvement in the six games the team played before winter break.

“Those close losses (to Red Wing 58-54 and to Austin 63-54) are teaching us to be more calm and patient near the end,” she said. “And we’re trying to improve every game, so that the end of the season is when we’re peaking.”