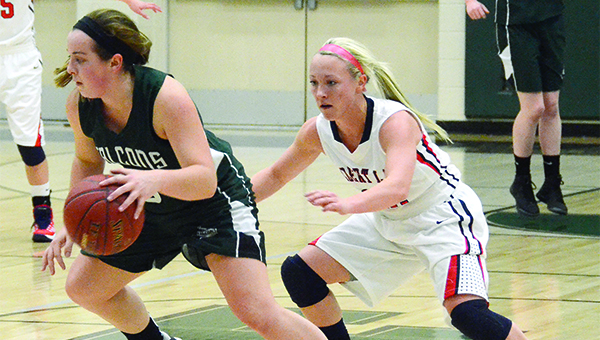 Faribault’s Jenna Wetzel tries to get around Albert Lea’s Bryn Woodside during the first half on Tuesday at Nomeland Gymnasium. — Miles Trump/Faribault Daily News

The Albert Lea girls’ basketball team snapped a three-game losing streak Tuesday when it beat Faribault 63-50 on the road.

Sydney Rehnelt led Albert Lea with 21 points. She was perfect at the free-throw line with six attempts, and she was 3 for 5 from behind the arc.

Megan Kortan also scored in double digits with 14 points. She had seven rebounds and tied Rehnelt with a team-high four assists.

“We moved the ball really well,” said Albert Lea head coach Lindsey Hugstad-Vaa. “We started to get into the flow of our offense.”

Sarah Niebuhr returned to Albert Lea’s lineup after sitting out games against Austin and Red Wing last week with an injury.

“Overall, it was a good team effort,” Hugstad-Vaa said.

The Rockets (1-3 overall, 0-1 Big Nine Conference) are coming off a 56-29 home win over Northfield after three losses to start the season.