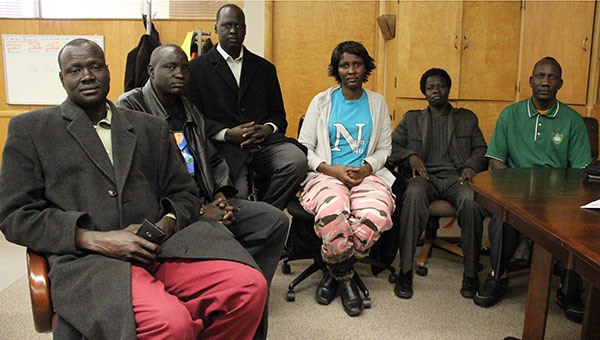 The population of South Sudanese refugees in Albert Lea are worried about friends, relatives and tribal members during unrest in their home country. However, only some of what is being reported in the news media about the violence is true, they said.

Much of the media lacks access, so reporters know only what the government spouts or allows them to witness. The problem, said the refugees, is the government under the current president, Salva Kiir, is corrupt and seeks to kill political enemies.

They said there was no coup attempt, as Kiir told the nation Monday, and said instead it seems like the start of a tribal civil war. They say Kiir is making a power grab by killing opponents members of other tribes.

“We need to tell the world that dictator is not allowed at this time,” said refugee David Gatkuouth, 45. “We need freedom.”

There are about 100 to 150 South Sudanese in Albert Lea, refugees from a 20-year civil war between the Muslim segment in northern Sudan, and the oil-rich Christian segment in the southern portion. The war halted in 2005, and South Sudan gained autonomy within Sudan. In 2011 South Sudan became the world’s newest country. Many of the refugees living in Albert Lea spent time in camps in Kenya and Ethiopia before coming to America.

Most of the local population came a little at a time over the past five years. Some settled in Albert Lea and Austin because of jobs with Albert Lea Select Foods, Cargill, Hormel and Quality Pork Processors, while other families came to be part of a growing South Sudanese population.

Six South Sudanese people sat down with the Albert Lea Tribune on Wednesday to share their view of what is happening. The six are Gatkuouth, Change Ruach, Peter Cham, James Chol, Lam Riang and Martha Gony. All but Chol and Gony are U.S. citizens. Chol is a Canadian citizen. Gony is working on becoming an American citizen. They are in frequent contact with people in South Sudan.

But first, some background:

Kiir, who was elected in 2010 and took office in 2011, fired Vice President Riek Machar in July after it was discovered Machar had interest in running for president in the 2015 elections. Kiir is a member of the Dinka tribe, which is found across a large swath of Africa, but he is from the Dinkas inhabiting the Bahr el Ghazal region of South Sudan. The South Sudanese in Albert Lea called his tribe Dinka Bahr el Ghazal. They say Dinka people from other areas of the country are not aligned with the Dinka Bahr el Ghazal.

The South Sudanese in Albert Lea are from the Nuer tribe, who occupy the east central area of South Sudan along the White Nile River and toward the border with Ethopia. Machar hails from the Nuer people.

There have been reports of government officials who have gone missing. Many are suspected to be dead.

Ruach, 32, and the others said the missing officials are from the Nuer tribe.

Kiir failed to pay public employees over the past three or four months, Ruach said. Kiir told the people he lost the money — which Ruach described as $4.5 million — in the presidential palace in the capital city of Juba. The Sudan Tribune reported in March that Kiir claimed $6 million was stolen from the palace.

Ruach and the others say he used that money to fund a 3,000-person ground force from his home tribe and to fund 3,000 additional members of the force from an array of places across the country. The country has six major tribes, with Dinka and Nuer as the two largest.

Ruach said Kiir called for a curfew on Sunday night — which was reported in the media — but what they said wasn’t reported was that members of the force scoured Juba, knocking on homes. When people came to door, the force members could tell by dialect and markings whether the family hailed from the Nuer tribe.

If so, they killed them, they said. Some had their homes smashed by tanks and trucks, they said.

“It was not a ‘coup.’ He planted that so he could kill innocents and get rid of political rivals,” Ruach said.

Ruach said Kiir kept the media out long enough to allow time for his force to take the dead to mass graves or to rivers.

The force captured neither Machar nor the widow of the founder of the South Sudanese autonomy, Rebecca Nyandeng De Mabior, herself a Dinka but from another region than Kiir. She opposes Kiir’s actions, too, they said. Her late husband, John Garang, attended Grinnell University and Iowa State University. He died in a helicopter crash in 2005, while in office as the vice president of Sudan, then a united country.

Presently, there is an all-out manhunt for Machar by the military. Kiir claimed he was behind the alleged “coup.” Machar has denied the allegations.

“If the international community does not act, the situation in South Sudan will get worse,” Ruach said. “Kiir will feel empowered and the war will spread.”

Chol said he would like to return to Canada so he can return to his homeland and defend it. He is afraid the country will devolve into genocide.

The violence has spread into the countryside this week, they said, as Kiir’s forces attack the Nuer people.

Gatkuouth’s brother, Ezekial, was among the missing government officials. Gatkuouth said Kiir is attempting to create a dictatorship by wiping out members of the opposing tribe. He is selecting officials from his region to be government and party officials. If nothing is done by the world, South Sudan will become another Rwanda, he said.

“If the world does not take action, why even make the International Criminal Court?” Gatkuouth asked.

Ruach said Kiir refused to allow his young government to pass election laws so it could be prepared for 2015.

Many of the government officials rounded up were sitting in coffee shops, hotels or their homes at the time, he said.

“How can they cause a coup by sitting in coffee shops and hotels, hanging out?” Ruach asked. “This proves it is not a coup.”

He said during the decades-long civil war, Kiir was among the top leaders in the Army fighting for independence. He said Kiir was known for being ruthless and had the authority to send people to their deaths before firing squads. Ruach said violence is what Kiir is accustomed to and is why he should not be president.

The latest Associated Press report said at least 500 people have been killed and 700 wounded in South Sudanese violence. The story, however, cites the government’s information minister. The story says about 20,000 people have sought refuge at U.N. facilities in Juba.

Some of what the Albert Lea refugees said is reflected in the latest media reports. The AP story said: “The clashes apparently are pitting soldiers from the majority Dinka tribe of President Salva Kiir against those from ousted Vice President Riek Machar’s Nuer ethnic group, raising concerns the violence could degenerate into civil war.”

It goes on to add that Kiir wants to meet with Machar.

U.N. chief Ban Ki-moon told reporters Wednesday that South Sudan was experiencing a political crisis that “urgently needs to be dealt with through political dialogue.”

On Tuesday the United States ordered its citizens to leave South Sudan immediately. An evacuation flight left Wednesday, and it was to be seen whether a second would be available today.

In a BBC interview Wednesday, Machar denied any link with the current fighting and blamed it on a conflict between members of the presidential guard. He added that government troops used the incident to arrest some of his supporters Monday and that he himself escaped.

“Someone wanted to frame me,” he said. “I had to flee. They are hunting me down.”

Foreign Minister Barnaba Marial Benjamin, however, insisted that Machar had orchestrated the violence in a bid to take power.

“If he wants to become president, he needs to wait for elections,” Benjamin said. “He wants to be president but in the wrong way.”

The Nuer people of Albert Lea scoff at the foreign minister’s claim.

“The Albert Lea Human Rights Commission is focused on educating concerning human rights.  We have South Sudanese residents in Albert Lea whom we want to know they are safe here and are welcome here, and we want the community to know what our new neighbors are struggling with as they have loved ones back in their homeland. Our goal is to educate and to bring understanding and we want the Sudanese people to feel support from the community as well.”