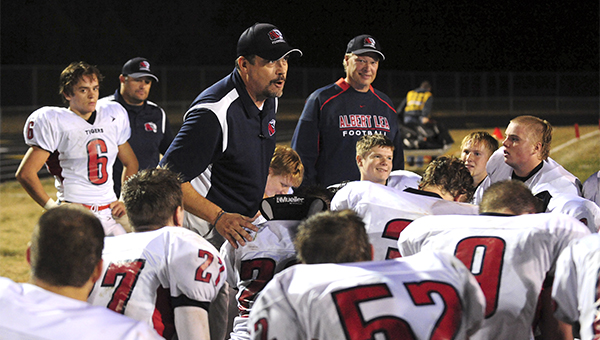 The Tribune learned of the resignation on Tuesday.

“There are a lot of factors that go into making a decision this tough,” he said. “It’s a great program, but I don’t plan to be back.”

He finished his third season as head coach after being an assistant coach at Albert Lea for 16 years.

Last year, Albert Lea was 3-7 with wins over Mankato East, 46-28, and Austin, 40-19, during the regular season. The Tigers also beat Waseca 14-9 in the first round of the Section 1AAAA playoffs after losing 42-7 to the same team in the season opener.

This year, Albert Lea had it’s toughest season of his tenure, going 0-9 with near misses at home against Mankato East, 12-6, and at Rochester Century, 21-10.

“It’s not all about the win and losses, even though we’d like to win more,” Jeffrey said. “It’s about what kids learn as they come through. I’m proud of the kids — what they’ve done while I’ve been head coach and the previous 16 years before that.”

“They always encouraged me and kept positive,” he said. “I couldn’t ask for more. They’re outstanding.”

Jeffrey is a 1990 Albert Lea High School graduate. He received his Bachelor of Science degree in teaching from Winona State University and is in his ninth year of teaching business at ALHS. He was the 2008 Wal-Mart Teacher of the Year. He is a member of the National Scholastic Press Association and the Minnesota Coaches Association, according to the ALHS official website.

Jeffrey also has been an assistant basketball coach at ALHS. Read how he scored a team-high 26 points for the 1988 Albert Lea boys’ basketball team in a win over Mankato West in the sports memories article by Chuck Anderson in Sunday’s Tribune.

Jeffrey said he hasn’t thought about re-joining the coaching ranks in basketball.

“That’s not even on my radar right now,” he said. “I’m just going to be the best teacher I can be in the classroom.”

Although Jeffrey said he’ll be out of coaching for the next few years, he didn’t say he’s out of the game for good.