Knights lift off in 2nd half 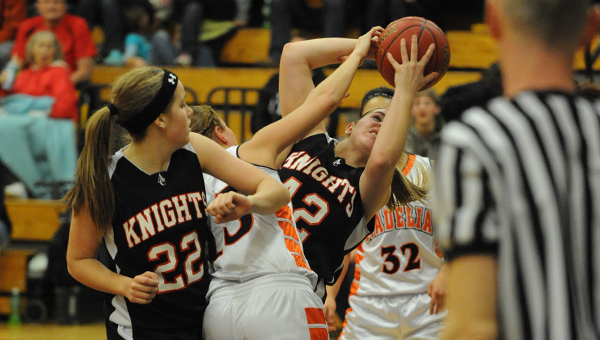 ALDEN — Night and day. That was the difference between the first and second halves on Friday when the Alden-Conger girls’ basketball team hosted Madelia. 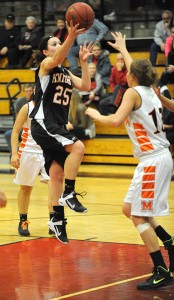 Karina Skov of Alden-Conger drives into the lane for two of her 14 points Friday against Madelia. Skov is a three-year starter at point guard. — Micah Bader/Albert Lea Tribune

In the first half, the Knights never led. In the second half, they never trailed. The score was tied at 18 at halftime, and Alden-Conger went on to win 51-29.

Knights head coach Jenny Hovendick said her team was able to stay in the game by controlling the boards to counteract cold shooting from the field.

“We were able to get second and third chances on the offensive end, and we were limiting Madelia to one shot and then we were taking control of the ball,” she said.

After allowing Madelia to thrive in the first half, Alden-Conger shut down the Blackhawks’ offense in the second: In the first 14 minutes of the second half, Madelia was held to three points.

“We always pride ourselves on defense and creating a lot of pressure,” Hovendick said.

The Knights were led offensively in the paint by Liesel Theusch. She boosted her offensive production from 7.8 points per game to 9.3 points per game through four contests this year. Against Madelia, she earned a team-high 17 points and added 12 rebounds for a double-double. 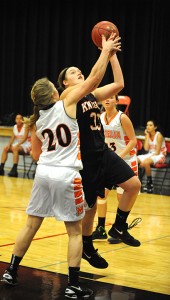 Liesel Theusch of Alden-Conger drives to the basket Friday against Madelia. Theusch had a double-double with 17 points and 12 rebounds. — Micah Bader/Albert Lea Tribune

Despite having played significant minutes as a junior, Theusch had big shoes to fill. She took over for last year’s leading scorer, Taylor Martin. In addition to Martin’s 16.2 points per game at the center position, she also led the team on the glass with 8.6 rebounds per game.

“She (Theusch) is starting to fill that role really nicely,” Hovendick said. “Her energy on the boards makes things happen down low for us.”

However, Theusch isn’t alone on the block. The Knights also have senior center Brooke Reyerson, who led the team with 14 rebounds — 10 defensive and four offensive — and was two points away from a double-double.

“Brooke gets a lot of deflections and tips,” Hovendick said. “Even if she’s not getting the rebound, she keeps the ball alive for someone else to grab it. That’s what we need down there. We need both of those girls to scrap for us.”

Getting Theusch and Reyerson the ball was a talented group of returning guards led by point guard and three-year starter Karina Skov.

“We’ve been together for a long time, which helps us out a lot,” Skov said. 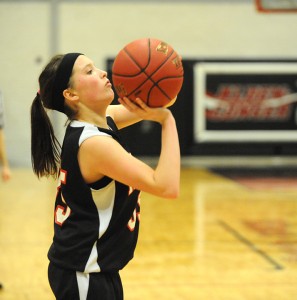 The Knights didn’t use their transition game often in the first half, but Alden-Conger was able to utilize it in the second half.

“We’re trying to do an up-tempo game. Get the outlet and push the ball up the court,” Skov said. “We haven’t quite gotten there yet, but we’re definitely looking to keep it fast the whole game.”

Next, Alden-Conger (3-1 overall, 2-0 Valley Conference) will play at Randolph at 7:30 p.m. Tuesday. Last season, Alden-Conger beat the Rockets 52-40 at home. So far this season, the Knights defeated the Minnesota Academy for the Deaf 57-45 and Lake Crystal-Wellcome Memorial 53-42. Their only loss was at Cleveland 52-47.