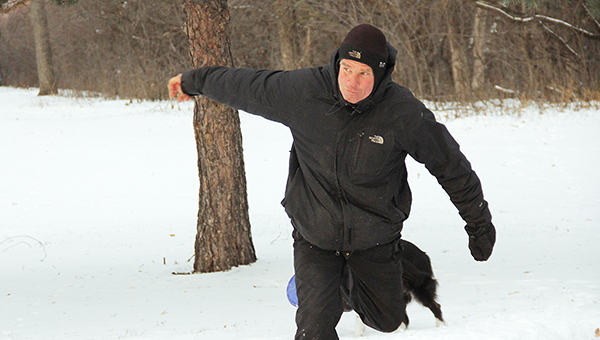 Dave Sime tees off at Hole 6 of Oak Island Disc Golf Course at Bancroft Bay Park on Friday. He brings his dog, Spirit, with him when he plays. The dog likes to fetch its disc, but not the ones Sime throws. — Tim Engstrom/Albert Lea Tribune

Before the Alden resident discovered disc golf in 2009, his weight would go down in the summer and up in the winter. A golf course superintendent, he would be more active in the warm months. His normal weight was 210 to 215 pounds. If he was consistent about walking and exercising, he would lose 10 or so.

People call him “Discin’ Dave” for a reason. He frequently plays the sport, in any season, day or night. Disc golf helped him reach 185 to 190, but he credits playing it in the winter with aiding him in maintaining that weight.

But isn’t it cold? 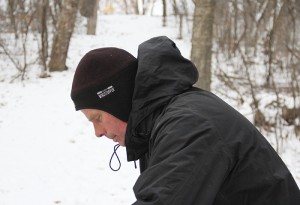 Dave Sime prepares to tee off Friday on Hole 5 at Oak Island Disc Golf Course in Albert Lea. He credits winter disc golf with helping him keep his weight under 200 pounds.

“Once you try it and you dress right, it’s no hardship whatsoever.”

And how does night golf work?

“We tape these flat lights to the discs, and I even sell them to players without their own lights.”

A study from Western Carolina University, Brigham Young University and the Professional Disc Golf Association found that participants of disc golf take about 5,613 steps during an 18-hole round. That’s about 300 steps a hole. The average American takes 5,117 steps in a typical day.

“Walking 18 holes of disc golf provided 56 percent of the recommended 10,000 steps per day for healthy living,” the study results state.

A typical day, plus a round of disc golf, gets most people above the 10,000-step mark, the study shows. It noted that when people miss a shot, such as throwing the disc into the woods instead of staying on the fairway, it only adds to the exercise.

Sime noted that the sport also requires picking up discs and his bag frequently, plus the sudden burst of energy from the entire body required to throw a disc from a concrete tee farther than the length of a football field. Then there is the mental game — sizing distances, judging wind, keeping calm and cool.

Sime grew up in Shakopee. His father was the superintendent at Interlachen Country Club in Edina. He got his start in maintaining golf courses when he was 13, seeding divots at Interlachen.

Sime got his bachelor’s degree in business marketing at Mankato State University in 1990, with a minor in automotive engineering. His roommate dated a woman he liked, and when they broke up, he asked her out.

“We can’t have a pretty girl go unattached,” he said. 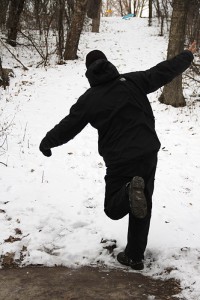 On March 17, Dave and Darcy Sime will have been married for 30 years. They live in Alden. Their oldest son, Matt, maintains a YMCA camp in Wisconsin on the shore of Lake Pepin, and their youngest son, Josh, lives in Alden and works in ceramics at Winnebago Industries in Forest City, Iowa. Darcy works as a team leader at the Target store in Austin.

Sime has been the superintendent for Oak View Golf Club south of Freeborn since March 2003 and for Riverview Golf Course in New Richland since March 2008. He manages workers and keeps the courses in shape.

For instance, when he started at Oak View, he noticed that the greens had shrunk over the years, and he proposed changes to the course’s board. They were approved, and he’s kept them going well since then. He also puts his minor in auto engineering to use repairing golf carts.

The Simes lived in Benson and Mankato before moving to Alden. Dave Sime worked at the Mankato Golf Club and the Benson Golf Club. He also tried his skills for two years selling life insurance. He didn’t like it.

“Cold calling was the worst,” he said.

In the winters, Sime can be spotted clearing sidewalks of snow for downtown Alden merchants. He also works as the maintenance man for apartments.

He and local members of the Flying Lea Disc Golf Club keep the tee pads clear at the two courses at Bancroft Bay Park. In some cities, players put away their discs in the winter, but Albert Lea is known in disc golf circles as a year-round place to throw plastic.

Matt Sime started playing disc golf in November 2009 and sought to turn his father on to the sport during a trip to Arizona. Soon after, Dave’s father died, and he decided to give the sport a shot. In the spring of 2010, Sime joined the Flying Lea Disc Golf Club, playing in its leagues. He now runs a random doubles league on Mondays in the warm months.

Matt travels when he can and has played more than 1,200 courses. Dave has about 200 courses under his belt. The two in November traveled in Dave’s van to play courses Iowa, Kentucky, Tennessee, Georgia, North Carolina, South Carolina and Missouri. They slept in the back of the van and just about each day would play from sunrise to sunset.

Dave Sime’s first tournament was the Bancroft Bay Open in 2010. In 2011, a sponsored, professional disc golfer moved to Albert Lea by the name Ross Brandt, who taught Sime to throw farther and to putt more accurately. He eventually became a partner in Brandt’s company, TeeBoxx, which designs courses, sells discs, creates signs and, most notably, produces vending machines that sell discs right at the courses. Sime is working to get more conventional golf courses to install disc golf courses in their unused land as a second source of revenue. A golf course in Plainview already offers both sports. So does the course at Fort Snelling in the Twin Cities.

His 51st birthday is Dec. 29. As in past years, he and a van of friends hope to play 100 holes on that day. They intend to go to Cedar Creek Park in Fairmont, which has two 18-hole courses, and play their hearts out.

At tournaments this past year Sime played as an amateur, usually in a division for men 40 years or older. In 2014, he plans to play in the same age level but as a professional. As a pro, he wins cash instead of credit with a disc vendor. What’s more, he is considering playing in a high-profile tournament in Scottsdale and Fountain Hills, Ariz., that kicks off the National Tour, the sport’s top level. Called the Memorial Championship, it is broadcast over the Internet. If he goes, he will travel with Brandt.

Sime doesn’t expect to win, but he doesn’t play to win. Moving up to the professional level, in fact, makes it harder to win. Many players are content to play below their level in an effort to beat lower-level players, which is called sandbagging.

“It’s good to push myself. It’s easy to bag, but I’m not worried about winning. I just like to play,” Sime said.

Interesting fact: He has kept a daily journal since 1978.