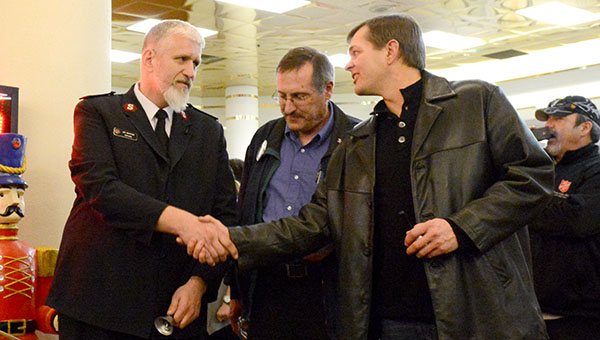 The Salvation Army’s nationwide bell-ringing competition has ended in a three-way tie.

Salvation Army Capt. Jim Brickson of Albert Lea, Maj. Marcelino “Butch” Soriano of California and Andre Thompson of Texas laid down their bells at 8 p.m. Saturday after 105 hours of ringing.

The men had been ringing since 11 a.m. Tuesday, and all three beat the previous world record of 80 hours on Friday night.

“We all took an amazing journey together,” Brickson said.

On Saturday night, about 30 to 40 people celebrated with Brickson, 50, at the mall as the time clock came to a stop.

A group of employees from Plaza Morena came out of the restaurant and cheered for Brickson while banging pots and pans, and the Rev. George Marin of Grace Christian Church led the group in a prayer as Brickson rested in the chair used by Santa Claus during the Christmas season.

“I didn’t do this by myself,” he said, noting the hundreds of people who came by to see him or donated during the week. “Thanks for keeping me mentally prepared for the day.”

He said the hardest aspect of the whole experience was not being able to go home with his family every day.

The bell-ringing challenge garnered national attention, bringing interviews from media outlets such as CNN, FOX, Headline News and PBS, among several other state and local television, radio stations and newspapers. His initial story in the Albert Lea Tribune was picked up by the Associated Press and sent to news organizations everywhere.

Miles said each time she came to the mall to visit Brickson during his quest, she saw people stopping to encourage him.

Even on Saturday, as she spent a majority of the day at Walmart with the church’s youth group — who were ringing bells outside and helping with the toy drive inside — people were asking about their captain.

“I can’t tell you how many times strangers were coming up to the kids and asking how their captain was doing,” she said. “People were excited about the goal that was reached by Capt. Jim and the Salvation Army. They were proud.”

Look to the Tribune for the final total.