Bonnie Jean Karl, 83, of Worthington, died on Sunday, Dec. 1, 2013, at Sanford USD Medical Center in Sioux Falls, S.D. She was born Jan. 10, 1930, in Slayton, to Rudolph and Diana (Pearson) Johnson, the oldest of five children. Bonnie grew up on the family farm northwest of Slayton and graduated from Slayton High School.

She married Raymond Karl of Slayton on Feb. 24, 1948. They operated a service station and later a Pontiac and Rambler car dealership. In 1962, they moved to Worthington to start a Pontiac/Oldsmobile/Cadillac dealership, which they operated until 1972. In 1973, they and their son, Jim, opened an auto parts store known as General Trading Co. Their son, Chuck, joined them a year later. After Ray’s death in 1979, Bonnie and sons continued the business, later known as Karl’s Carquest Auto Parts, expanding to three stores in Worthington, Albert Lea and Jackson. In 2011, Bonnie retired from the business, now operated by her sons. 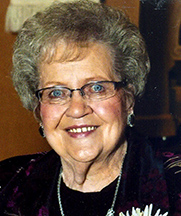 Bonnie broke glass ceilings as a businesswoman, and was honored in February 1981 as the first female national Carquest Jobber of the Month in a male-dominated business. She also received the Oldsmobile Athena Award for leadership and community service by a professional woman.

She was a member of the First United Methodist Church and was very active in the church for many years. In addition to serving on numerous boards and committees, Bonnie was active in Women’s Circle and prayer chain. She was also a Sunday school teacher and for more than 25 years was the wedding coordinator.

Bonnie was a member of the Elks and the American Legion women’s auxiliary. She had many friends and enjoyed playing bridge, entertaining, spending time with her daughter, Roxanne, and watching her grandchildren and great-grandchildren grow up. An avid cook and baker, Bonnie was well known for hosting many luncheons and dinner parties. For family events, Bonnie planned menus and did most of the cooking. She especially loved hosting Christmas Eve celebrations for her children and grandchildren, having them all together at her home for 49 consecutive years.

She was preceded in death by her parents; husband; and brother, Harold Johnson.