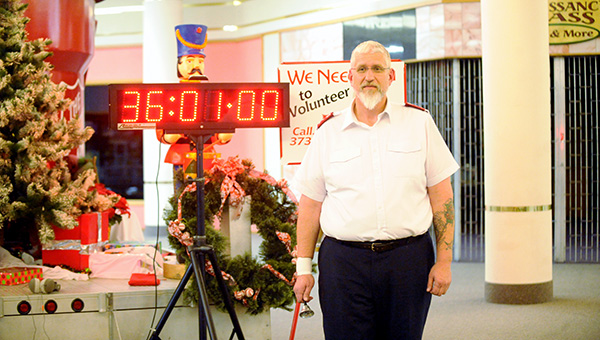 Salvation Army Capt. Jim Brickson surpassed the Minnesota record for bell-ringing at 11 p.m. Wednesday. The record of 36 hours and 1 minute was set in St. Cloud by Tiga Stevenson in 2011. — Brandi Hagen/Albert Lea Tribune

The Salvation Army’s bell-ringing contest has narrowed to three, according to officials with the organization Wednesday evening.

“I’ll feel a whole lot better when I’m the only one left,” Brickson said.

He broke the Minnesota record for ringing a Salvation Army bell for 36 hours and 1 minute at 11:01 p.m. Wednesday while standing sock-footed in the center court at Northbridge Mall.

“We’re just moving on like it was a pit stop,” Brickson said.

Prior to breaking the state record, Brickson had only had three five-minute breaks. He planned to take a two-hour nap at 3 a.m. Thursday.

The three remaining participants are attempting to break the world record of 80 hours.

They began ringing at 11 a.m. Tuesday and, if successful, will surpass the record at 7 p.m. Friday.

“It would be nice to keep that title in the Midwest and certainly in Minnesota,” Brickson said.

Throughout his effort, Brickson hopes to raise $24,000 for the local organization’s red kettle campaign.

Brickson welcomes the public to join him at the kettle at any hour of the day or to call 373-8776 to volunteer at another kettle.

The Albert Lea Tribune has live streaming video of the quest online by going to the navigation bar and clicking on “bell ringer.”

How much did Salvation Army captain has raise Wednesday?