Bullying leads to suicide attempt and switch to online classrooms

WELLS – Ryan Lacher tried to make his point loud and clear as he threatened a suicide attempt on Aug. 31, 2012. Ryan, then in eighth grade at United South Central school, was fed up with being bullied and was in a tree ready to jump when police showed up at his home that day.

“People ask if I’m embarrassed about what happened,” Ryan’s mom, Michelle, said. “I’m not embarrassed. I wonder how I ever let it get that far.” 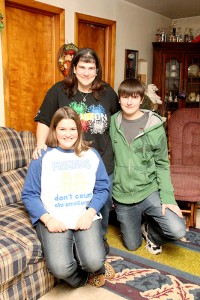 Michelle said she started to notice a change in her son when he was in the second grade. He seemed to have a lot of anxiety and was developing a temper, and as the years went on, he started coming home with bruises. She said she, her husband, Mark, and their daughter, Taylor, started to realize something was wrong, but found themselves helpless because Ryan didn’t want to ever talk about whatever was troubling him.

As they found out, there were a few boys at school who would tease and throw things at Ryan.

There were some teachers, coaches and counselors who would listen, Michelle said, but there were others who brushed it off as “boys will be boys.”

Because the family had seen a story on TV about an Austin girl who had killed herself after being bullied, they started paying more attention to Ryan’s behavior.

Taylor alerted her parents after Ryan gave her some of his belongings, like a video game system – something that he never shared before.

Then, the day of the attempt, the family had plans to go to a football game. Taylor knew something wasn’t right. She told her parents that Ryan wanted them out of the house too bad. She was right and the family never ended up going to that football game.

Ryan was taken away in a police car and admitted to the hospital.

Michelle and her husband pulled both children out of the school, and started to look for alternative schooling because Taylor was being bullied, too.

What they found was iQ Academy Minnesota, a tuition-free public school open to all students in Minnesota.

The school is something the two students can do from home on their laptops, and if they need extra help, can travel to Rochester and meet a teacher in person.

Taylor said she likes the school because she can do the school work when she wants, spend more time with her family, and she isn’t getting bullied anymore. Her grades have went from below average to all As. She was even named student ambassador this year.

Ryan, Michelle has noticed, has less troubles getting out of bed in the morning and is starting to improve his schoolwork. And, now he is involved with a Christian group called Fushion that volunteers in the community.

Taylor is comfortable with the online school, but Ryan said he misses being around the kids and would like to go to the new school next year.

“He wants to go back and make a difference,” Michelle said. “But, Ryan’s changed and those kids haven’t. We will not allow him to go backwards from where we are.”

Michelle said she predicts what would happen is what happens in the movie called “Bully” by Lee Hirsch. The student returns to school to make a difference and gets bullied all over again.

What concerns Michelle is what Ryan said when he was in the sixth grade.

“He told me he was afraid of being pulled out of school because he was strong enough to take it, but he didn’t know who their next victim was going to be because he knew they would just move on to somebody else,” Michelle said.

Now that it has been more than a year since Ryan’s attempt and the family is on the right track, Michelle wants all parents to be aware of similar bullying situations.

There is a Facebook page called “Let’s take a stand for those who are not strong enough to stand alone.”

She encourages anyone and everyone who needs someone to talk to to message the page.