Catherine Jeanette Edmonds, 89, of Streator, Ill., died on Dec. 1, 2013, at OSF St. Francis Medical Center in Peoria, Ill. A visitation will be from 9 to 11 a.m. Monday at the Winterrowd Funeral Home, Streator, Ill. Funeral services will be at 11 a.m. Monday at the funeral home in Illinois. Burial will be at the East Freeborn Lutheran Church Cemetery in rural Albert Lea. 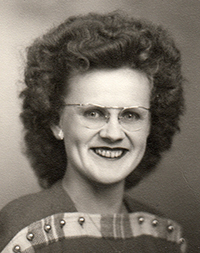 Catherine was born May 12, 1924, in Albert Lea, Freeborn County, to Martin Gilbert and Cora Matilda (Lindsey) Enderson. She was baptized by the Rev. Nuswang and confirmed by Rev. Magellsin in the Lutheran faith. She married Alfred J. Edmonds on Sept. 2, 1950 in Joliet, Ill. They moved to Streator where they all lived all their life.

Catherine raised two boys. She also worked in the cafeteria for Grand Ridge School for 25 years, until her retirement in 1992. She loved being with children, cleaning houses, doing things for people and volunteer work. She was an immaculate house keeper.

Catherine loved to play all card games, her favorites being Uno and Yahtzee. She also enjoyed embroidering, crocheting, baking and working outside in her flower garden.

She was preceded in death by her parents; husband, Alfred; sisters, Ethel, Lucille and Pearl; and brother Milton.