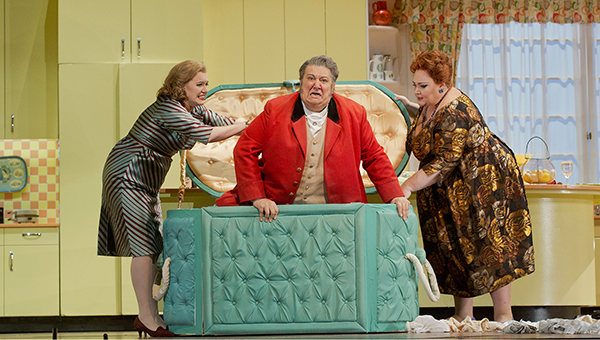 Giuseppe Verdi’s most popular comedy, “Falstaff,” will light up the stage at the Marion Ross Performing Arts Center this weekend.

The show, based on William Shakespeare’s Sir John Falstaff, will be this weekend’s The Met: Live in HD production. Showtime is set for 11:55 a.m. Saturday.

In the production, Falstaff decides to seduce several wealthy wives of Windsor citizens to help ease his troublesome financial situation. What follows is a funny plot of revenge on Falstaff by the wives and their husbands and daughters. 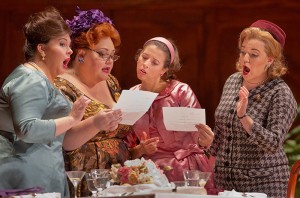 The opera is sung in Italian with English subtitles, the length of the show is approximately 2 hours and 50 minutes. Intermission will be hosted by Renée Fleming with interviews and backstage scenery changes.

Coffee and cookies from Prairie Wind Coffee will be available during intermission in the Green Room. General tickets for the opera are $20. Tickets for students under the age of 30 are $12. Tickets are available at the ACT box office on Thursday from 4 to 7 p.m. They are also available at the Albert Lea Convention and Visitors Bureau and online at ACTonBroadway.com or AlbertLeaCivicMusic.com.

• There will be a pool tournament at the Albert Lea Eagles Club to benefit the local hospice. Food will be served from 5:30 to 9 p.m. Entertainment will be provided by Tom Minehart. The pool tournament runs all weekend.

• Megaforce Karaoke will be at the Albert Lea Moose Club at 7 p.m.

• The Marion Ross Performing Arts Center will host its “Soft Sounds of Christmas” concert at 7:30 p.m. Tickets are $18.

• The Holiday Bazaar and Cookie Walk is from 9 a.m. to noon at First Presbyterian Church. Admission to the bazaar is free. The cookie walk costs $20. Proceeds from the event will benefit the church youth group’s 2014 mission trip to Jamaica.

• The Albert Lea Farmers Market runs from 9 a.m. to noon at Northbridge Mall by the food court.

• The Marion Ross Performing Arts Center will host its “Soft Sounds of Christmas” concert at 7:30 p.m. Tickets are $18.

• The Alley Katz Band will perform live Christmas music at 2 p.m. at the American Legion Club. There is no charge.

• The Alano Society of Albert Lea will host a breakfast from 8 a.m. to noon. Cost is $6 per person.

• There will be an Amaranth Pancake Breakfast at the Masonic Lodge from 8 a.m. to 1 p.m. Albert Lea High School cross country teams will be waiting table. Donations will be accepted.

• The Marion Ross Performing Arts Center will host its “Soft Sounds of Christmas” concert at 2 p.m. Tickets are $18.

• The Harmony Junction Chorus of Albert Lea will perform their annual Christmas benefit concert along with members of the Albert Lea Community Band at 3 p.m. at United Methodist Church and 7 p.m. at St. Theodore’s Catholic Church. Free-will offerings will be accepted. Contributions will support the community food shelf at First Presbyterian Church and the Salvation Army.

•The second Advent Recital will take place at Salem Lutheran Church from 3 to 3:30 p.m. Robert Tewes, who is the director of music Grace Lutheran Church, will be the organist.