GLENVILLE — Students at Glenville-Emmons High School got out of school a few hours early in Wednesday and gave back to their community.

The school’s seventh- through 12th-graders were released at 1 p.m. for the first Day of Caring. The event was put on by vocational agriculture teacher Angie James, with the help of other school faculty. The students participated in service projects across Freeborn County as a way to show community support during the holiday season. 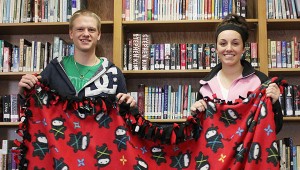 Cole Jergens and Rieley Madson hold up a blanket that they, along with other students from Glenville-Emmons, made to donate to the Salvation Army during the school’s day of caring on Wednesday. –Drew Claussen/Albert Lea Tribune

“I actually got the idea from my brother,” James said. “They started doing community services days, too, and when I taught in Albert Lea we did community service days a few times. I thought it was a great way to get the kids involved in the community and give back at Christmas time.”

James said that in previous years students would watch a movie for a pre-winter break activity.

“We thought that this was a better way for them to be active in the community,” she said.

Glenville-Emmons’ winter break starts on Monday, the day of caring was on Wednesday, so teachers still had a couple days to give finals before classes let out.

Students chose which event they wanted to go to. The band and choir went to area nursing homes. Other students cleaned up and walked animals at the Humane Society of Freeborn County, rang bells at Shopko and Northbridge Mall for the Salvation Army, or organized food shelf donations at the Salvation Army building.

“We helped at the food shelf at the Salvation Army, myself and six students,” James said. “They said that the amount of work that those kids got done in an hour and a half would have taken the two of them by themselves two days. So they were very impressed with the kids.”

Some students also stayed at the high school and either made tie-fleece blankets for the Salvation Army or helped remodel the school’s weight room.

James said the students had a blast and were already making suggestions about how to improve the event next year.

“When I asked them what they would change they said they would like to do it for an entire day instead of a couple hours,” she said. “So we’re looking at hopefully expanding next year to more places and more time at those places.”