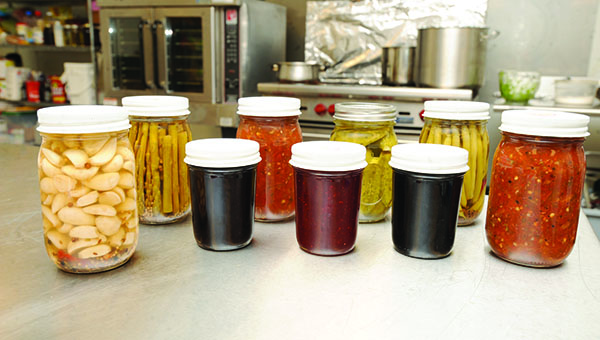 Jams and jellies were the start of Grandma’s Gourmets. Now the business offers many more products and a catering service. –Brandi Hagen

Before many of Kimberly Olson’s creations see the light of day, they’ve got to pass the test. That is, the family test.

“They’re nasty little food critics,” Kimberly Olson said about her children with laugh. “I don’t know where they get it.”

Olson is the owner and head chef at Grandma’s Gourmets, a homemade and artisian food business in Albert Lea. Her business management degree from Minnesota State University, Mankato, is fresh off the press, but she’s been cooking at home since 1977 and in restaurants since 1985.

However, it wasn’t until 2008 that the idea to build her own business began.

“I started making jam and jelly as presents for my siblings,” Olson said. “Then it kind of went viral.” 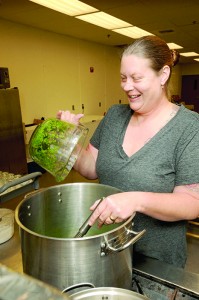 Kimberly Olson mixes ingredients together for one of her recipes.

Olson’s husband, Dan, son, Zack, and daughter, Bethany, supported the business idea and have been taste-test Guinea pigs. Olson’s forte is jams and jellies, but her scope is much broader. She’ll make just about anything. One of her favorite things to make is barbecue with Dan, and barbecue Frito pie is becoming a fan favorite.

On Grandma’s Gourmets official website, 16 different kinds of jams, made of local ingredients, are listed with some concoctions that can’t be ordered from a chain grocery store: raspberry jalepeño, strawberry rhubarb, tomato and blackberry sage jam among others.

“I can experiment and try whatever I want,” she said. “The only thing that’s limiting me is my imagination.”

Owning a business requires dedication and hard work, but it also has perks, Olson said.

“I like the fact that I can come in when I want, leave when I want and create what I want,” she said. “If I decide tomorrow that I want to make some crazy kind of fudge, I’ll do it. There’s nothing limiting me, except food laws.”

Recipe ideas come to Olson in many ways. She likes to watch “Iron Chef” on television, and read through cookbooks.

“They might have something normal, but then show a really ingenious idea about what to do with an ingredient,” she said.

Other times, Olson is inspired in the middle of the night.

“Some of my craziest ideas have come to me a 2 o’clock in the morning,” she said. “I’ll wake up, and sometimes it works out.” 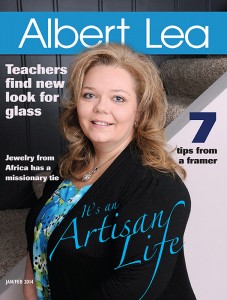 Find this feature and others in the latest issue of Albert Lea Magazine.

www.grandmasgourmets.com helped get the word out, but the main way the business grew was by being visible in the community, Olson said.

“We’ve done the farmers market in town since 2009, and we do the Rendezvous here.”