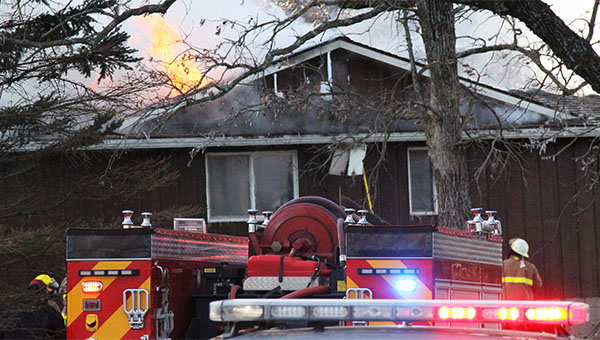 A family is without a home this morning after a blaze Thursday that firefighters battled for about eight hours.

The house, at 18261 U.S. Highway 69, fronts Pickerel Lake and is across from Hart Brothers Weaponry. It is owned by Bill and Judith Raatz.

Karl said firefighters were alerted to the blaze at about 9 a.m. When his department arrived, there was heavy smoke, but the fire quickly grew with wind coming up the back of the house from the west.

He said he called in the Glenville Fire Department almost immediately to assist, and then within a short amount of time, the Albert Lea, Emmons, Manchester, Hayward, Conger and Clarks Grove departments joined.

The departments were called mainly for manpower, as the firefighters worked in temperatures of 7 degrees with a wind chill of -11 degrees.

“We tried to watch the guys,” Karl said. “As they were getting fatigued or getting too cold we’d send them out.”

At one point there were teams both in the basement and in the upstairs, but when some of the ceilings started to fall, he said he took the firefighters out to handle the blaze only from the outside.

Though the fire was maintained to the attic and a section in the basement, the house is considered a total loss with the roof and garage completely destroyed, he said. The inside of the house, while still in tact, suffered severe water damage.

Karl said though the cause of the fire has not been verified, it is likely it could have started from a wood stove.

A representative from the state fire marshal’s office has been called in to assist and is expected to investigate Friday.

“Check your fireplaces and make sure everything’s safe,” Karl said. “This time of the year when it’s cold, a lot of people are using them.”

Man charged in shooting in Albert Lea earlier this month

Man arrested for fleeing, DWI and other reports

Mandela mourned the world over