Update: Damage is mostly in the basement 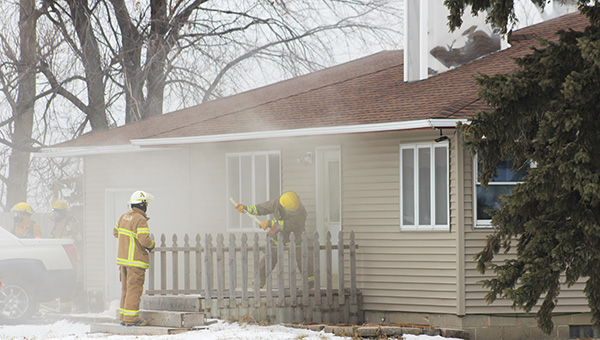 A firefighter drives the back of an ax into the door at 69952 County Road 46 in an attempt to open the front door. — Tim Engstrom/Albert Lea Tribune

ARMSTRONG — A man went to the hospital Thursday afternoon after the basement of his home caught fire.

Alden firefighters were joined by firefighters from Conger, Albert Lea Township, Manchester and Freeborn to fight a fire at the home of Jason R. Kach, 69952 County Road 46, at that road’s Armstrong corner.

The call for the fire went out at about 12:45 p.m. Alden Fire Chief Jim Thunstedt said the last unit left the home at 4:15 p.m. The state fire marshal was on the scene to investigate the cause. The fire chief said the cause remains under investigation.

He said firefighters first entered the home through the garage, then sought to break down the front door to vent the smoke.

The house appears to be about 40 percent damaged, Thunstedt said, mostly in the basement. He said some floor joists under the kitchen are burned, so it will be up to the insurance company to determine whether the structure is salvageable.

He said Kach was transported by ambulance to Mayo Clinic Health System in Albert Lea for smoke inhalation.

The hospital reported Kach was treated and released Thursday.

The firefighters did not struggle with freezing water, though if the temperature had been 10 degrees cooler, they would have. The air temperature in Albert Lea at 1:15 p.m. was 21 degrees, with at 14 mph northeast wind. The wind chill was 8 degrees.

Thunstedt said tanker trucks drove to Alden and to the Lake Chapeau Drive corner in Albert Lea to fill up with water at fire hydrants.

Deputies with the Freeborn County Sheriff’s Office handled traffic control. The home is at the corner of County Road 46 and County Road 14.