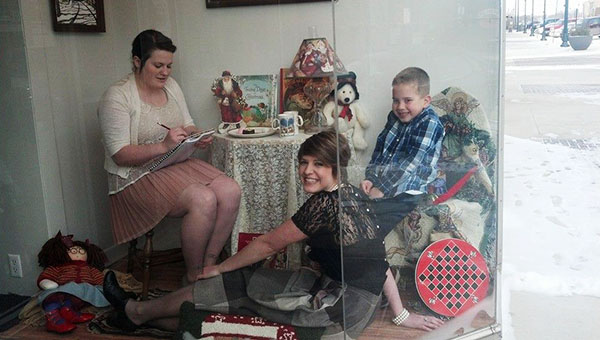 Shoppers in downtown Albert Lea on weekends this December have noticed additional vendors in the stores. It’s part of what’s called the Holiday Bazaar on Broadway.

However, one place has had live models posing in the windows. It’s at the 212 S. Broadway building, and they will pose again today.

The building is owned by Robert and Angie Hoffman, and inside are 10 booths for the Holiday Bazaar. Angie said she is uncertain of the exact hours the models will pose, but she welcomed shoppers to come by and watch them.

The models are Holly Ryks, Emily Troe and Eli Troe.

Laura Lunde, a member of the organizing committee, said the bazaar provides shoppers with additional choices and shows off local art.

The Holiday Bazaar wraps up today. It is slated for noon to 3 p.m. Participating stores are found by looking for large gift-wrapped boxes in front of the buildings. The additional vendors are local crafters, artists and home-based businesses. For instance, shoppers might shop downtown for shoes, coffee or sporting goods and find pottery, sewing or baked goods, Lunde said. Some vendors are using space in a heated, vacant building, such as where the live models are.