Loss of job prompts a new field of work 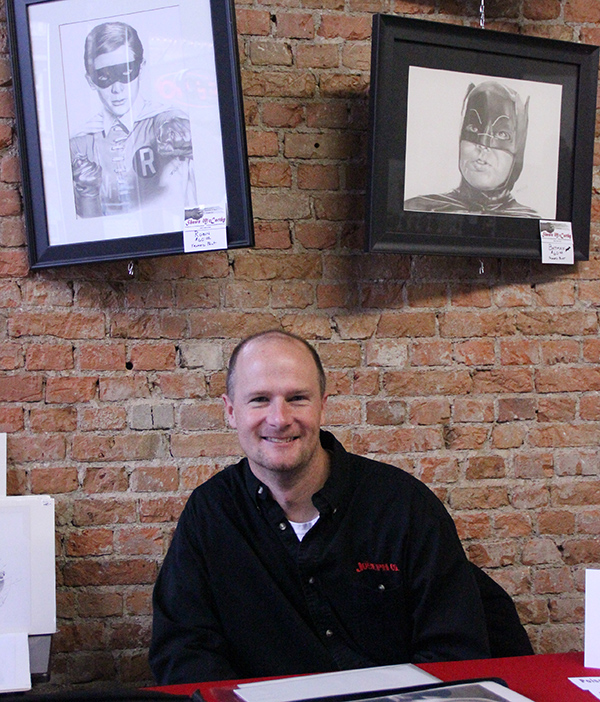 Artist Shawn McCarthy sits at his table inside Prairie Wind Coffee Saturday afternoon. McCarthy has been selling his work during the Holiday Bazaar on Broadway the past three weekends. — Drew Claussen/Albert Lea Tribune

Shawn McCarthy profession may be switching from being a carpenter to being an artist, and he’s OK with that.

McCarthy is a 42-year-old artist from Hollandale. He has been selling his work the past three weekends inside Prairie Wind Coffee as part of the Holiday Bazaar on Broadway.

“It started out as a hobby and a pastime,” McCarthy said. “And then people started wanting them for birthday presents and Christmas. Then I just started turning it over into some type of part-time job and hopefully turn it into a full-time job.”

McCarthy said he was laid off from his carpentry job a couple of months ago, which made now as good of time as ever to pursue art. He described it as a good opportunity.

He said God gave him two gifts: carpentry and art. With carpentry being hard on the body, art needs to take priority.

McCarthy does pencil drawings of portraits, pets, children and comic art. He said events like the Holiday Bazaar are crucial to get his work out there and also to look at what other artists are doing.

“It’s been a good avenue, and it’s been good exposure,” he said. “I can’t complain about it at all, it’s been fantastic.”

McCarthy said he has traveled to comic conventions in the Twin Cities and planned to do those again this year, along with conventions in St. Louis and Chicago.

Seeing the work of other artists feeds his artistic desire, he said. It sparks ideas.

McCarthy said a typical piece takes him about 20 to 25 hours. The bigger pieces run 30 to 35 hours as well as ones that are “more of a collage.”

He said drawing from multiple pictures or changing a backdrop from a photograph is especially challenging but very rewarding.

“Those ones, the drawing itself doesn’t take that much longer. It’s composing it beforehand to get it to that point where it’s all one picture,” McCarthy said. “They take a little bit longer, but with each one it’s a bigger challenge which makes it more fun and interesting.”

According to McCarthy, the most fun for him was giving the piece of work to his customer.

“Seeing the look on their face when they come back to pick up the picture is priceless,” he said.

McCarthy has a Facebook page (Facebook.com/IrishEyesStudi) and can also be reached at irisheyesstudio@hotmail.com or 507-402-4769.