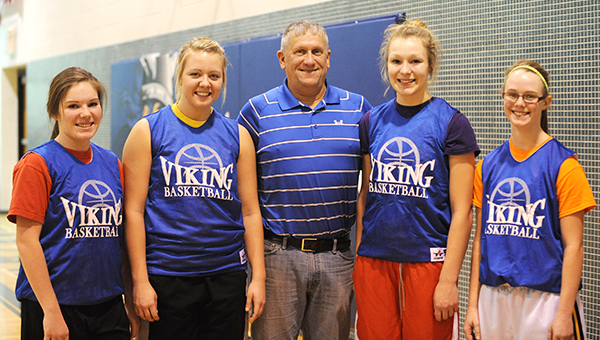 The Northwood-Kensett girls’ basketball team is off to its best start in school history and the state has taken notice.

The Vikings (6-1 overall, 1-1 Corn Bowl Conference) have been ranked No. 12 in Class 1A by the Iowa Girls High School Athletic Union polls for the last two weeks.

“I think we can be competitive with everyone we play, and I know they (the team) believe that, too,” said Northwood-Kensett head coach Daryl Love in his 12th season at the helm. “That’s a big plus.”

It’s the first time the team has been ranked in the era of 5-on-5 basketball, Love said. However, he sees the polls as a distraction.

“The girls decided that it was a lot more fun last year when we were the underdog going against ranked teams at the end of the year and putting pressure on them,” Love said. “It’s a target on your back.”

Despite its lack of flying under the radar this year and having to replace four of five starters from last year, Northwood-Kensett maintained its momentum from last season’s run to the regional finals. After a 46-36 win over Newman Catholic in the first round of the postseason, Northwood-Kensett beat No. 15 North Iowa in round two and No. 14 Clarksville in round three before being eliminated by No. 1 Newell-Fonda in the finals.

Picking up where they left off, the Vikings began the 2013 season by outscoring their opponents 375-278 through the first seven games, winning by an average of 14 points per game.

That’s been largely in part to the play of sophomore Hattie Davidson and senior Kayla Branstad.

“Hattie worked really hard on having an outside shot,” Love said. “Last year, she was primarily playing down in the post. Now, she’s just as dangerous outside.”

On the glass, Davidson averages 9.5 rebounds per game. That’s a half of a rebound away from averaging a double-double while having a constant shadow on defense.

“We’ve seen a lot of box-and-1s and junk defenses trying to take her away,” Love said. “But the good thing is that the other girls have stepped up to alleviate that pressure and help her out.”

“Hattie does a good job of realizing what the defense is giving us and racking up the assists by passing to everyone else,” Branstad said. “It’s what a lot of people don’t expect from our team: You take one away, and you have four other girls who can score, too.”

Branstad stepped up to fill the void from graduated senior Maren Davidson, who is also Davidson’s older sister.

“It’s hard moving from my first high school season and getting to play with someone I’ve known my whole life, but this group of girls has been so much fun to play with,” Davidson said. “We’ve learned so much and improved together.”

Next, Northwood-Kensett plays at No. 10 Class 2A North Butler at 6 p.m. today. In North Butler’s 10-year existence, the Bearcats have only lost two conference girls’ basketball games, Love said.

Last year, the Vikings lost 58-38 to the Bearcats at home, but Northwood-Kensett showed improvement late in the season in a 57-55 loss in Greene, Iowa, where Davidson had a double-double with 24 points and 10 rebounds.