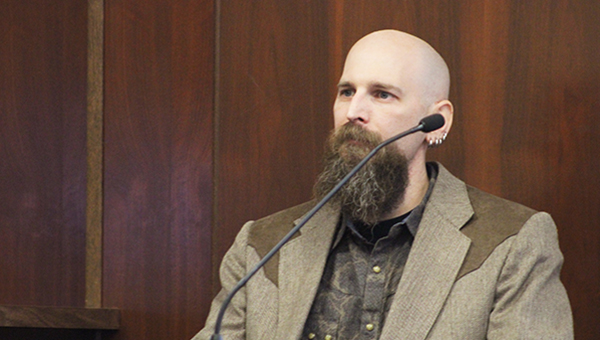 Northwood resident Leo Hendrick speaks on the stand Friday in Northwood about the chickens he has in his backyard. — Sarah Stultz/Albert Lea Tribune

NORTHWOOD — After months of controversy, a six-member jury on Friday found a Northwood man guilty of keeping chickens unlawfully on his property.

The verdict came after less than 15 minutes of deliberation.

Northwood City Attorney John Greve said Leo Hendrick will have until the end of the month to remove the chickens from behind his home before the city files a municipal infraction against him. Hendrick and his wife, Jerilea, and their two young children, reside at 602 First Ave. N.

“It’s not exactly what we were looking for, but it’s what they came up with,” Hendrick said in response to the verdict.

According to Northwood City Code Section 55.05, “it is unlawful for a person to keep livestock within the city except by written consent of the council or except in compliance with the city’s zoning regulations.”

Hendrick said he has had multiple people step up who have said they will keep the chickens for him, and he will attend the Northwood City Council meeting at the end of January to propose changing the city ordinance.

“We have overwhelming support to get this changed,” he said.

Hendrick moved to Northwood almost six years ago and has since been trying to wean his family off processed foods, and in many instances, unnecessary chemicals and hormones. He is part of a national trend in food consumption.

He said he got his first chickens in June and found out he was in violation of city code in August from City Councilor Doug Helgeland.

At the beginning of September, a Worth County Sheriff’s Office deputy stopped by the house with a letter stating he would have to remove the animals from the property.

Hendrick said he approached the Northwood City Council to see if the ordinance could be changed to allow chickens to be kept within city limits.

He testified Friday he was met with negativity and disdain and claimed the council never told him what other avenues he could take to get the matter approved. He argued there was no procedure in place to do so, and he has never received a single complaint from any of his neighbors.

Greve said Hendrick admitted to having the chickens and it was proven that he did not get written consent to have them there. Plus, for a person to have the animals, his or her property must be two acres and the enclosure for the chickens must be at least 250 feet away from the nearest structure.

“It’s not a question of whether he’s a nice guy and wants to raise chickens to quote feed his family,” Greve said.

The city attorney said Hendrick’s lawyer, Michael Moeller of Clear Lake, was asking for jury sympathy when the case was one that was a simple violation.He said there are many laws people don’t agree with, but that doesn’t mean they should break those laws.

“We don’t want you to think we’re picking on Mr. Hendrick,” Greve said. “We simply want the laws enforced.”

Moeller argued the chickens did not cause excessive dust, noise, smoke or odor.

He said city leaders wanted people to think it was an “open and shut case,” when in reality it wasn’t as simple.

Both Mayor Jane Bloomingdale and Helgeland testified Hendrick came before the council asking to change the ordinance but never requested consent for his property.

Magistrate Judge Patrick Byrne, of Mason City, who presided over the trial, ordered Hendrick pay a $50 fine plus court costs. The charge of unlawfully keeping the chickens is a simple misdemeanor.