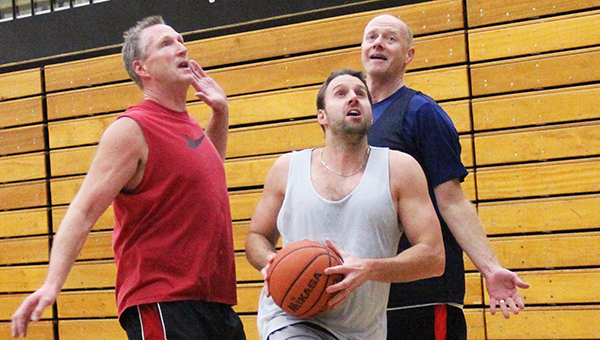 Nobody would confuse the quality of basketball being played on Wednesday night at Southwest Middle School with that of the National Basketball Association — but that’s all right with the players that frequent Albert Lea Community Education’s open gym.

Open gym happens every Wednesday night at Southwest. Things get underway after the middle school basketball practices wrap up, usually around 7:30 p.m. To attend, all a person has to do is make a once-a-year $5 donation to Community Ed.

“I’ve probably been coming for close to five years now,” Albert Lea resident Jason Willner said. “I used to play basketball in high school and to come back out and play and get some exercise is just fun. It’s fun to be with the guys and play. We have a good time.” 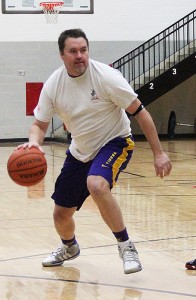 Jason Willner looks for a teammate to pass to during Wednesday night’s Community Education open gym at Southwest Middle School.

Willner said that all the guys have fun with each other, and some light-hearted smack talk is always going back and forth.

“There’s a little harassment in there,” he said. “But it’s all good fun.”

Though Willner knew some of the guys when he started playing, a lot of the friendships were made on the court.

“Over the years now we’ve really gotten to be pretty close,” he said. “We’ll actually get together and hang out and do stuff together. So we’re all pretty close friends now.”

Mark Habben started going to open gym when he moved to town about four years ago. He said he saw it as an opportunity to get some exercise in while having fun.

“I always played basketball growing up and in high school, and I just enjoy the workout aspect of it and not being on a treadmill like a hamster,” Habben said. “We run up and down and have some competitiveness. And hang out with friends. That’s one of the biggest benefits of it.”

The open gym is technically just for adults, but a lot of the guys bring their children. The younger athletes watch the grownups for a while, until the other half of the gym opens up. Then they shoot hoops or even catch footballs. 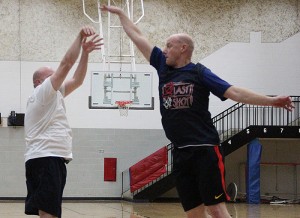 “We do bring some of our sons so they can shoot around,” Albert Lea resident Troy Doyle said.

Willner said that in bringing their children, it also gives everyone an opportunity to instill some positive values in them through example.

All three men agreed that it was important to get exercise in the winter and that the overall theme of open gym was that it was a place to have a good time.

“It gives us guys a chance to hang out and make fun of each other and kind of act like kids for a while,” Doyle said. “And think that we’re still good when maybe we’re not anymore.”

Willner got the last cheapshot of the pregame interviews in when he smiled and said, “A lot of these guys look up to me,” before taking the court.