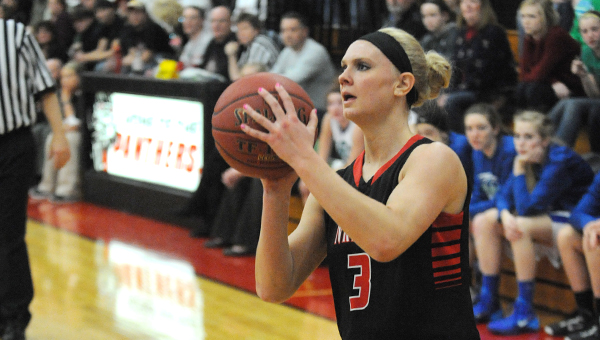 Carlie Wagner of New Richland-Hartland-Ellendale Geneva shoots for three of her 32 points against Maple River in the first half. She finished with 36 points. — Micah Bader/Albert Lea Tribune

That’s how the New Richland-Hartland-Ellendale-Geneva girls’ basketball team built a 17-0 lead en route to a 90-35 thrashing of Maple River Friday on the Panthers’ home floor. 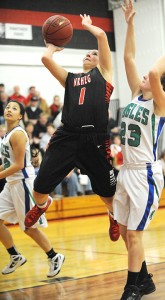 The win gave NRHEG its fifth victory of the season and its 35th win in a row dating back to 2012. It also marked Panthers head coach John Schultz’s 200th win while leading the program.

NRHEG’s Carlie Wagner also had a chance to pass a milestone. However, after dismantling Maple River with 32 points in the first half, she cheered the team on from the bench for the majority of the second half to show good sportsmanship.

In fitting fashion, Schultz said Carlie will most likely pass the 3,000 point barrier Friday at the St. Peter tournament — the same place she reached 1,000 and 2,000 career points.

Carlie started the game by forcing a turnover out of a trap on the right side of the Panthers half-court press. She scored in transition to give NRHEG a 2-0 lead, and the team never looked back.

“We had a good matchup with our guards who are strong and athletic,” Schultz said. “We stole the ball and did a lot of good things.” 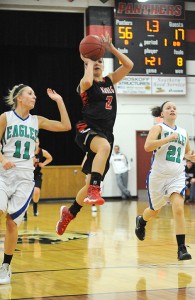 The first eight points of the game were scored in transition after steals by the Panthers, and Carlie tacked on a 3-point play to push her team’s lead to double digits (11-0).

The Eagles didn’t score until the 13-minute mark with one free throw.

“I feel like my role is usually defense, but it’s fun when I can get a few inside shots and make them,” Stork said.

Most of the Panthers points were scored in transition, but they showed they could also score on the inside in half-court sets with precise interior passing and put-backs after crashing the boards. 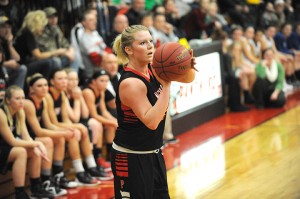 Jade Schultz of New Richland-Hartland-Ellendale-Geneva shoots from the perimeter, while her teammates and coaches watch from the bench Friday in a 90-35 home win over Maple River. Schultz led the Panthers on the glass with 13 rebounds. — Micah Bader/Albert Lea Tribune

In the second half, Kayley Camerer came alive with 11 points. Ten of the 11 players on the Panthers’ roster scored.

NRHEG’s next game will be against Gibbon-Fairfax-Winthrop at 2 p.m. Friday at the St. Peter tournament. The Panthers are back-to-back champs at the tournament.

Aside from the NRHEG and St. Peter (3-3 overall), Schultz said the other teams usually change from year to year. This year, the other two teams will be GFW (2-3 overall) and Mound Westonka (3-4 overall).

“It should be a lot of fun, and there’s some good competition there,” Stork said.