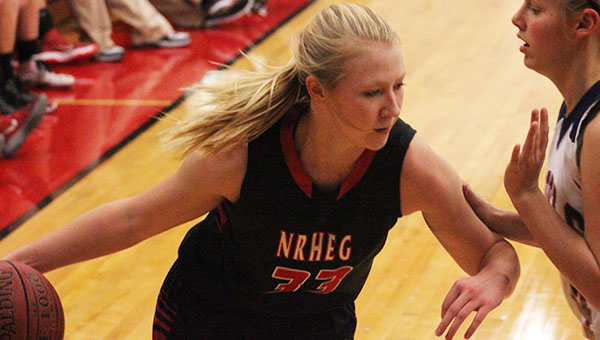 Before the first game of the season Thursday night, the public address announcer introduced the New Richland-Hartland-Ellendale-Geneva girls’ basketball team as “the 2012-13 state champion Panthers,” as if the crowd needed to be reminded.

The Panthers played like state champs in their first game back and trounced United South Central 80-19.

“They picked up where we left off. It’s basically the same kids,” NRHEG head coach John Schultz said. “We’re seeing our weight lifting kind of coming through for us. I thought we looked a little stronger.”

Senior and University of Minnesota-commit Carlier Wagner led the Panthers in scoring with 38 points. NRHEG got off to a quick start with its stingy defense and brilliant transition game. The Panthers forced numerous turnovers on Thursday and instantly looked for a half-court pass to a streaking player.

“That’s the only way we play, aggressive on both sides of the ball,” Schultz said. “The girls think they’re stronger than anybody that we see and that’s a good thing.”

Maddie Wagner had 13 points and Marnie Wagner had 10. Carlie and Ryann Hagen each had six rebounds. Carlie had seven assists and Hannah Lundberg had six steals. NRHEG had 31 team rebounds and 24 team steals.

NRHEG’s high-pressure defense led to some foul trouble. The Panthers had 10 fouls in each half. Schultz said learning to play tough defense while avoiding fouls was one thing that the team would have to work on.

“They’re going to be aggressive, and we’re going to get our fouls,” he said. “They got to learn to back off a little. We were reaching too much.”

With the lopsided victory, Schultz was able to play all of his players, gaining valuable experience for his bench players.

“It’s going to pay off, we got a lot of kids in tonight,” Schultz said. “Even at key times, we had a good mix with our starters and our bench. We’re going to need them, as aggressive as we play, we’re going to get into foul trouble.”

The Panthers picked up right where where did last year, and the crowd in the NRHEG High gym did, too. Athletic Director Dan Stork said some of the crowd began filing in for the ninth-grade game at 4:30 p.m. and stayed all the way to the varsity game at 7:15 p.m. At tip off the gym was packed with fans from both sides.

“We knew it’d be full tonight,” Schultz said. “The kids feed off that. We appreciate it a ton, and it’s fun to have a lot of people at the game.”