Pickup crashes on I-35 bridge 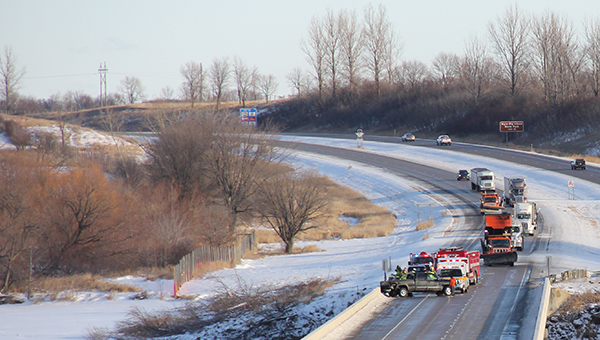 A crash at the north end of the southbound Interstate 35 bridge over Albert Lea Lake on Tuesday morning backed up traffic temporarily. — Tim Engstrom/Albert Lea Tribune

At least two people were injured, according to the Minnesota State Patrol, when a black Chevrolet pickup spun out Tuesday morning and struck a freeway bridge over Albert Lea Lake.

A black Chevy pickup sits on the southbound Interstate 35 bridge over Albert Lea Lake on Tuesday morning after it crashed. Ambulances prepare to carry the injured to the Albert Lea hospital.

The State Patrol says the roadway of southbound Interstate 35 was icy when a the 2007 Chevrolet Silverado driven by Luis Vinalay-Orbe, 30, of St. Paul hit a patch of ice and lost control, spinning across the two lanes, striking a center guardrail, came back across the lanes and hit the bridge.

Silvestre Vinalay-Luna was a passenger in the Silverado. Both were listed as having injuries that were not life-threatening.

The crash happened near the bridge entrance for the southbound lanes of Interstate 35 at about 9 a.m. and caused one lane of the southbound bridge to be closed. Traffic was slowed for the other lane. The scene was cleared by 9:50 a.m.

The State Patrol description does not explain how a second vehicle, listed as “unknown” make and model in the State Patrol report, was involved. It said a person with an “unknown” name was in the second automobile. The person’s injuries were not documented.

The Albert Lea Police Department and the Freeborn County Sheriff’s Office assisted the Minnesota State Patrol. Two Gold Cross ambulances and an Albert Lea fire truck were at the bridge, too.