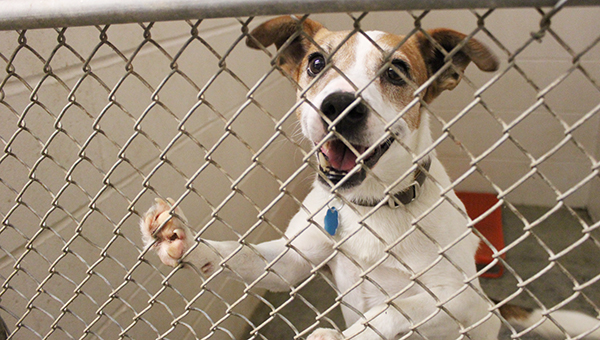 Milo, a Jack Russell terrier, seems to smile from his cage at the Freeborn County Humane Society on Tuesday. He is one of 13 dogs seized from 104 S. First Ave. in Albert Lea last week. — Sarah Stultz/
Albert Lea Tribune

An Albert Lea couple is fighting back after they said police improperly seized 13 dogs from their home last week.

Melissa Carroll said she and her husband, Cory, plan to take legal action against the city and the Freeborn County Humane Society, which handles the animals for the city and of which she was a former volunteer.

The Carrolls were reportedly running an animal rescue, The Rescue Connection, out of their home, 104 S. First Ave., when police received a tip that there were too many dogs at the house and conducted a search of the property on Dec. 4.

Melissa said The Rescue Connection has its business license and other paperwork in order and claimed she had been told by police officers earlier this year that their situation was legal.

“If it was illegal for me to have my rescue, that very first police officer who visited my house should have said this is illegal, that this is against city ordinance,” she said.

In addition, she alleged bias from the Freeborn County Humane Society and mistreatment of animals.

Albert Lea Police Department Lt. J.D. Carlson said after Melissa presented her paperwork an officer initially told her on face value that the organization was OK, but after further research police found out it wasn’t.

Carlson said during the search warrant police seized every animal that wasn’t licensed. At the Carrolls’ residence, there was only one licensed dog. They seized the 13 dogs plus one chinchilla.

According to Albert Lea city code, residents can have up to two dogs and two cats in the city.

Carlson said police told the Carrolls the Saturday before Thanksgiving Day that they had a week to comply with the ordinance, but when they did not do so, police cited them and ordered the search. He said the city does not have licenses for rescue operations.

Melissa said The Rescue Connection formed in January after she parted ways with the Humane Society as a volunteer. She claimed the animals were being mistreated there and that another volunteer had spread rumors about her to the point that one day the board asked her to leave.

Michelle Boettcher, treasurer for the Humane Society, said Carroll was yelling at the other volunteers and being rude to rescue organizations and potential adopters.

“After an accumulation of incidents where she was very unpleasant to people, we simply couldn’t let her continue,” Boettcher said.

Melissa said that’s when she and her husband moved forward with the idea of starting their own rescue.

She said they had plans to move out of Albert Lea somewhere in the county where the dogs could have more room, but when that fell through, they moved all the dogs to their home and were urgently looking for foster homes. At one point they had 16 rescue dogs and were able to adopt out six.

“Our biggest goal was obviously to find a place out of town, but it wasn’t happening very fast,” Melissa said.

Boettcher said the Carrolls had good intentions but she believes the whole process was rushed.

“She didn’t have foster homes in place, which is an important thing,” Boettcher said.

This summer, Melissa said, police started coming over after her neighbor, the assistant director at the Humane Society, reportedly started calling in and reporting that they were abusing their dogs and that the dogs were barking incessantly.

“Police would come, we would show them our paperwork and they said everything was fine,” she said.

Then “all of a sudden last week,” she said police came to their house and said they had to take the dogs.

Police took the dogs to the Humane Society, and some of the dogs have since been sent to boarding kennels in the area because of lack of space at the local shelter.

“The whole situation is very stressful for our dogs,” she said.

The Carrolls had through Wednesday to redeem the animals. As of Tuesday afternoon, there was one dog at the Albert Lea shelter and seven in boarding kennels.

People must pay a fine to redeem any impounded animal of $35 the first day plus $10 every day after, up through five business days.

Carlson said to redeem dogs requires up-to-date records on shots and licenses. He would not release more that the maximum allowed to the Carrolls themselves.

“I feel they are purposely making it difficult to get them out,” Melissa sald.

As for the allegation of mistreatment of animals at the Humane Society, Boettcher denied Melissa’s claims.

“The animals are treated very well,” Boettcher said. “We work our butts off to try to get them good care, get them lots of socialization.”

She said she thinks it is clear the Carrolls broke the law.

“I don’t know what basis a suit would have if she was clearly violating a law and the police properly executed a search warrant,” Boettcher said.