Robots will invade Albert Lea High School this weekend, but don’t worry, this isn’t the beginning of a J.J. Abrams movie.

Riverland Community College will host around 100 leading middle and high school Vex Robotics students from all over Minnesota and Iowa for the Dream It Do It Southern Minnesota Vex Robotics Tournament. Riverland hosted a smaller tournament last year with 17 teams. Event Coordinator Bob Bender said he was expecting 24 teams this year. Bender said the teams usually have five students on them.

“This is one of three events in that state of Minnesota where you have a chance to make it to the world competition,” Bender said. “So we will have at least one of our winners go off to the world and possibly two. It depends on how they score.”

The tournament features teams competing with and against other schools in robotic challenges. There is judging and head-to-head competitions.

“There’ll be several judges going around and evaluating all the teams,” Bender said. “Part of the thing is how they built their team, what they did for researching and who did what. It’s a team event, so the judging really looks at that.”

Bender said that some teams really go all out and make scrapbooks and have banners on the back of their booths. Throughout the day teams get paired up with a different school to form a new team and then they go against two other schools.

Bender said that one of tasks the teams will have to complete with their robots are moving beach balls with counterweights inside of them, along with moving something called a buckeyball.

“They’re about six or seven inches in diameter and are kind of octagon-shaped with multiple flat sides,” he said. “They have to either move them from one area to another area or pick them up and set them in tubes.”

Bender also said that there will be a bar that robots have to reach up to, latch on and pull themselves up. A robot pull-up, so to speak. There is also different manual and programmed routines that the robots will go through. 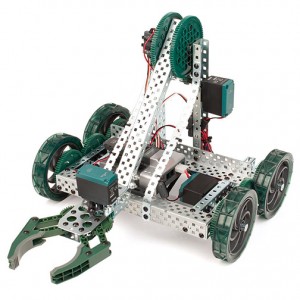 An example of a Vex Clawbot from the
Vex Robotics curriculum.

According to the event’s press release, Vex Robotics is the world’s fastest-growing competitive program for middle schools, high schools and colleges around the world. There are more than 350 competitions around the world that feature more than 5,000 teams from 30 different countries. The Vex Robotics Competition is managed by the Robotics Education & Competition Foundation. The program is designed to serve as a vehicle for students to develop life skills such as teamwork, leadership and project management.

Opening ceremonies are scheduled for 10 a.m. Saturday. Closing ceremonies will be at 4:30 p.m. The public is invited to attend the tournament; there is no charge.