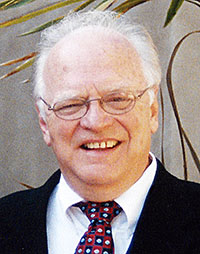 Roger was a 1961 graduate of Albert Lea High School. He received his undergraduate degree from the University of Minnesota where he was a member of the 1962 marching band that performed at the Rose Bowl. He completed his law degree from William Mitchell in 1970.

Roger devoted his law practice, and his life, to helping the little guy. He was known throughout St. Paul as a person of humility and generosity, a straight-shooter on whom you could always count for a fair shake. In the 1970s, Roger served as chairman of the 4th District DFL Party. He was a mentor to many political candidates at all levels, introducing them to a wider constituency and providing them with invaluable insights. Roger’s friendships were legion — from politicians to musicians to Everyday Joes. He enjoyed bowling on Monday nights, monthly dinners with the “Old Guy’s Group,” golf and fishing, tormenting his children with endless practical jokes, taking his mom to the casino and living in the city that he loved.

A visitation will be Tuesday from 5 to 7 p.m. and a memorial service will be Wednesday at 1:30 p.m., both at Willwerscheid Funeral Home in St. Paul. A celebration of Roger’s life will follow the memorial service and will take place from 3 to 6:30 p.m. at The Artists’ Quarter in St. Paul.

Memorials preferred to the Jeanne Arland Peterson Scholarship in Jazz Studies at the University Of Minnesota (music.umn.edu/give). The family has set up the following email address for friends and colleagues to submit their favorite Roger stories: rememberingroger@icloud.com.