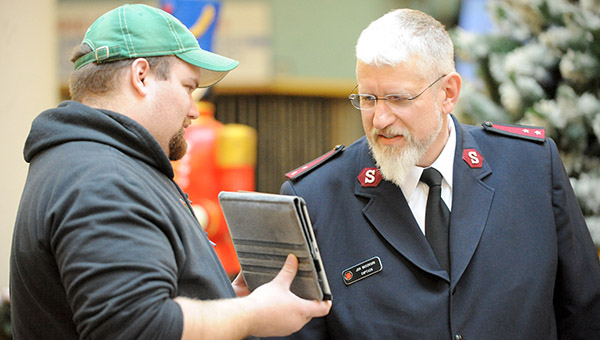 Capt. Jim Brickson of the Albert Lea Salvation Army Skypes with his son, Jeff, who is in the military and stationed in Virginia. Jeff was unable to be home for the world record attempt, but was able to see through the event through the web camera. — Brandi Hagen/Albert Lea Tribune

The captain of the Albert Lea Salvation Army woke up at 6 a.m. Tuesday and aims to avoid his bed until after 7 p.m. Friday. 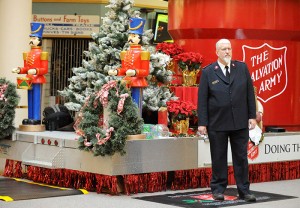 About 15 people, mostly his friends, gathered at 11 a.m. Tuesday in the center court of Northbridge Mall to help Jim Brickson kick off his world record attempt.

“I didn’t know what to expect,” Brickson said. “It’s humbling.”

He strives to break the Minnesota record and world record for consecutive bell-ringing. That means he needs to ring a bell for 80 hours. He hopes to raise $300 an hour. He calls his effort “Stand Up for Freeborn County.”

The current Minnesota record was set in 2011 at 36 hours and 1 minute in St. Cloud by Tiga Stevenson, and the latest world record of 80 hours was set by three people: Ryan Fass of Roswell, N.M., Jason Perkins of Suisun, Calif., and Darrell Tureskis of Springfield, Ill.

This time, there are six others competing for the record. They started at the same time Tuesday. 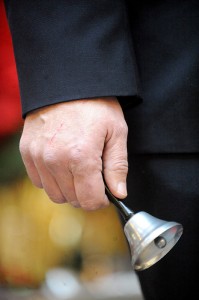 Like any weekday, Brickson took his daughter to school and grabbed some papers from the office, but on this Tuesday, he went to work at the mall instead of his desk.

His family, Brickson said, is service-oriented so they didn’t think too much of it when he said he was going to compete.

“This is a long time,” Brickson said. “There is a level of concern, I’m sure, but the outcome is to be able to serve people. Sometimes you do what it takes.”

Brickson isn’t too worried. He said his experience in the U.S. Navy and as a railroad engineer will provide him the stamina he needs to get through.

He has been checked by a doctor, and nurses will check on him through the contest.

Brickson said bell-ringing for hours on end doesn’t compare to what it takes to work in disaster relief.

“I’m standing in a mall, in my uniform, ringing a bell,” said Brickson, who has been with the Albert Lea Salvation Army since 2007. “I’m not in a T-shirt in the mud picking up debris. I think I’m in a lot safer situation now.”

The world record is a Salvation Army one and should not be confused with Guinness World Records. 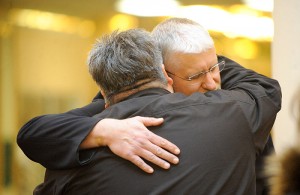 Last year’s competitors agreed as a group to stop at 80 hours because of the Sandy Hook Elementary School shootings on Dec. 14 and bell-ringing became less important.

Brickson said he will face the challenges one bite at a time. First, he will worry about the Minnesota record, then the world record, then whatever comes after that.

He said he brought noise-canceling headphones to wear because after so many hours of hearing the jingle of the bell, especially in the wee hours of the night when the mall is quiet, his ears will need a break.

He isn’t sure what he’ll do for meals, or how he will take his naps, but is sure it will all work out.

There is a time clock set up near him, but it is placed behind a sign so he doesn’t have to look at it. 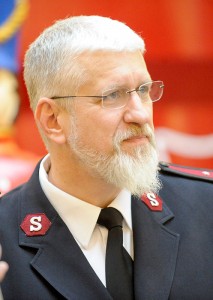 Capt. Jim Brickson of the Albert Lea Salvation Army talks to mall-goers Tuesday at the start of his attempt to break the world record of 80 hours for bell-ringing. — Brandi Hagen/Albert Lea Tribune

“Watching time is like watching a pot boil,” Brickson said.

During the contest, Brickson will not be allowed to sit or eat outside of small five-minute breaks for every 60 minutes of ringing. The breaks can be accumulated, and he is allowed to have something to drink. He will be able to use the showers at Anytime Fitness, and there will be two witnesses to his effort at all times.

Brickson said he has had many friends and others say they will be coming by to ring with him such as Gary Clancy, a writer for Outdoor News, mayors, sports writers and political representatives, to name a few.

Rev. George Marin of Grace Christian Church, and a friend of Brickson’s, was at the mall Tuesday to say a prayer and wish him well.

“Cappy is my good friend. He is the best Salvation Army leader that I’ve ever met in my career as a minister,” Marin said. “This is a huge opportunity for Albert Lea and Freeborn County.”

Marin said he will be back with his guitar to keep Brickson company.

Brickson said his effort has been a bigger deal than he thought it would be.

“We were looking at touching our community here in Freeborn County,” he said. “This thing has went coast to coast and now it’s on Headline News all over the world. Who knows who it’s going to touch?” 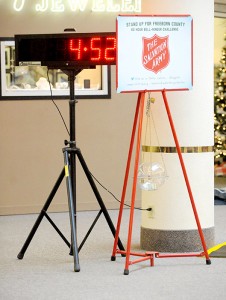 A time clock is set up in the Northbridge Mall to keep track of the amount of time Capt. Jim Brickson of the Albert Lea Salvation Army has spent bell-ringing. — Brandi Hagen/Albert Lea Tribune

The kettles will be collected every night and a total of all donations will be available each morning. Before the 80 hours even began, he received a $1,000 personal donation. The overall red kettle campaign goal for the local Salvation Army is $254,500.

Brickson welcomes the public to join him at the kettle at any hour of the day or to call 373-8776 to volunteer at another kettle.

Even his son, Jeff, who couldn’t be at the mall, was cheering his dad on from a military base in Virginia through Skype.

“If he was here, we’d be doing this together,” Brickson said.

The entire attempt is being streamed live at www.ustream.tv/channel/jimbrickson. Follow him on Twitter @ahrten. The national hashtag for the event is #Ringiton.

Supporters can donate at the mall throughout the entire 80 hours because the mall, which normally closes at night, will be staying open through the center court doors. Donations can be made by texting NORTH to 80888 or online at onlineredkettle.org/freeborn.

There is a Flickr page, too, with photos of Brickson.

How much he’s raised as of Tuesday night