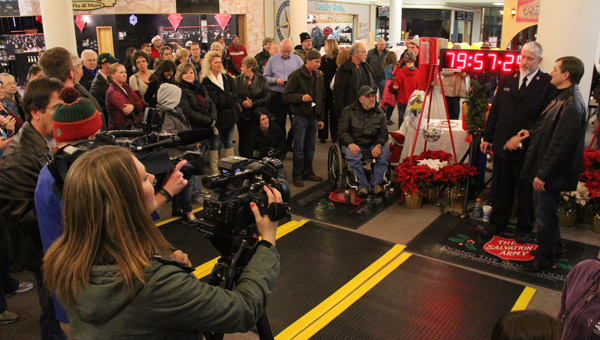 Members of the media and onlookers gather shortly before 7 p.m. at Northbridge Mall to watch Salvation Army Capt. Jim Brickson surpass the world record of 80 hours for ringing a Salvation Army bell.

Albert Lea Salvation Army Capt. Jim Brickson has broken the world record for ringing a Salvation Army bell. What’s not official is whether he will walk away the record holder. He must outlast two other bell ringers who started at the same time and day he did. 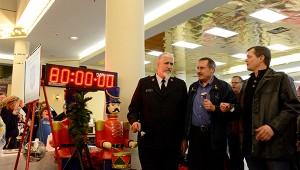 Capt. Jim Brickson of the Albert Lea Salvation Army stands with former mayor Mike Murtaugh, who is chairman of the Salvation Army advisory board, and current mayor Vern Rasmussen as the world record for bell ringing of 80 hours appears on the time clock. — Brandi Hagen/Albert Lea Tribune

They are Salvation Army Maj. Marcelino Soriano of San Diego, Calif., and Andre Thompson of Tyler, Texas. Soriano said he planned to quit after 100 hours. That was at 3 p.m. Saturday, as the Albert Lea Tribune went to press.

Brickson has no plans to quit now, he said at 7 p.m. Friday when he surpassed the world record of 80 hours. About 150 people gathered at the center court of Northbridge Mall in Albert Lea to watch him.

“While it’s exciting to share the record, my plan is to attain the record,” Brickson said.

The red kettle at his location at Northbridge Mall has brought in more than $28,000, as of Friday night.

“It’s really about a lot of people coming together,” Rasmussen said. “It’s amazing what one man can do.” 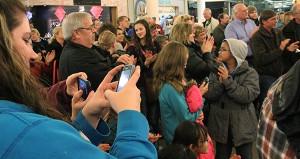 About an hour before the record-breaking moment, Brickson could be spotted on a live web camera hunched over. The 50-year-old wears all-leather, flat-sole Keen boots and regular black dress socks. He sometimes takes them off for a couple of hours to give his feet a rest. He stands on anti-fatigue mats that cashiers stand on, donated by Hollandale firm North American Mat Co.

Brickson said he isn’t in pain, after ringing a bell for 80 hours, with only minimal breaks. He is hunched over, he said, because he is stretching his back. He’s stiff, more than anything, he said. He takes ibuprofen, a common anti-inflammatory muscle relaxer, every six hours.

The rules allow a five-minute break for every hour. If he doesn’t take breaks, he can accumulate time for rest. On Thursday, he was able to take a shower and a nap.

He has been interviewed by Headline News, BBC, TV stations in the Twin Cities, New York and San Diego. His initial story in the Albert Lea Tribune was picked up by the Associated Press and sent to news organizations everywhere.

But his favorite part is getting to talk with people.

“I’m an extrovert,” he said. “People entertain me.” 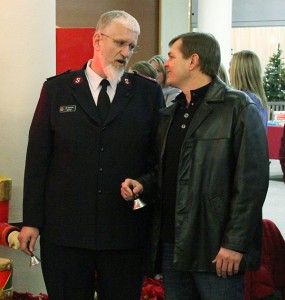 And he said he is thrilled with the attention the world record quest has placed on the Salvation Army and its annual red kettle campaign.

Meanwhile, Northbridge Mall has been packed with people.

Chuck Van Wey of Albert Lea said he has lived in Albert Lea for 40 years and has never seen the mall’s parking lot as full as it was Friday night.

His wife, Shari, said she walks the mall for an hour every morning and has been checking on Brickson to see if he is doing OK. And she makes a contribution, like so many others going by have.

Salvation Army Youth Director Lori Miles said all the staff at the local Salvation Army church — yes, the Salvation Army is a church denomination, with Sunday services — is nervous for the health and mental state of Brickson, but they are proud of him and “happy for the awareness to the efforts we do all year-round.”

The nonstop ringing takes place outside Skyline Jewelers. Owner Bruce Arbic said the traffic has been “astronomical” for his store and other merchants in the mall.

He said they all are appreciative of the work the Salvation Army does.

Having the bell ringing at the mall was Brickson’s idea, said the mall’s marketing director, Tina Stripe.

“We’ve been supporting him all the way,” she said.

Albert Lea resident Thom Moffitt attends the Salvation Army church. He was tweeting at the big moment, posting updates and photos to followers. He said he likes to show people “the behind-the-scenes stuff.” He noted he and other members have been checking up on Brickson through the record attempt.

Hansen, the Clarks Grove mayor, said the attention has been fantastic for Freeborn County.

“You go anywhere, and that’s all they talk about,” he said.

Click here to read all of the Tribune’s coverage of the world record attempt.