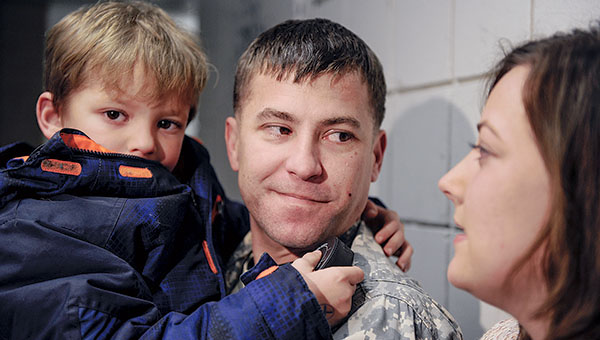 AUSTIN — It was a big night for Ashley Hood and her 5-year-old son, Dylan. 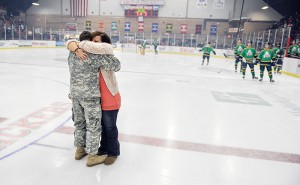 Ashley Hood hugs her husband, William Hood, after he surprised her and their son. — Eric Johnson/Albert Lea Tribune

The two were given the honor of dropping the ceremonial puck before the start of the Austin Bruins game Friday night against the Brookings Blizzard. It was Military Night at Riverside Arena.

Dylan dropped the puck between Austin’s Josh Bretner and Brookings’ Nick DeCenzo, but neither had any idea what was really in store for mother and son.

As the puck was given back to Dylan, announcer Brian Schultz told Ashley to turn around and what she saw was her husband, U.S. Army Staff Sgt. William Hood making his way on the ice, surprising his wife and son.

Ashley said she didn’t see William at first and didn’t believe initially what was happening. 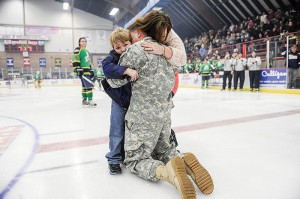 But it was no joke as William dropped to his knees at center ice for a tearful reunion with his family.

It truly was, especially considering it was initially Ashley’s plan to begin with.

According to her aunt Elaine Williamson, who works at Staples and has worked closely with the Bruins organization, the plan was the take William to the special night for America’s serving men and women.

“We were thinking that could be nice,” Elaine said. “But I came back and told her it couldn’t happen.”

William is serving an 11-month stint in Jordan, but a sponsorship from Eastwood Bank, First Farmers and Merchants, Smythe and employees from the Hormel Institute helped get William flown back state-side.

“Oh my god, I’m just shaking,” Ashley said afterwards. “I’m so happy for our family. It’s the best thing that ever happened to us. I’m so thankful.”

It wasn’t an easy wait for William, who had to endure the time waiting prior to the game and the big reveal.

“I’m trying not to think about it,” he said at the time. “I’m fighting really hard right now.”

But perhaps the most resounding statement of the night came without words.

When asked if he was happy and if he would remember the night, Dylan simply nodded with a big grin and hugged his dad. There was nothing left to be said.