KAMPALA, Uganda  — Clashes between military factions in South Sudan have spread from the capital to the rural state of Jonglei, a South Sudanese military official said today. Up to 500 people are reported to have been killed since Sunday in the world’s newest country.

Albert Lea has a small population of South Sudanese families who are concerned about friends and relatives in the country.

South Sudanese military spokesman Col. Philip Aguer told The Associated Press that there was fighting overnight among troops in Jonglei, the largest state in South Sudan, and he was trying to confirm reports there of desertions from the military.

United Nations diplomats said as many as 500 people have been killed in violence that is believed to be largely along ethnic lines. About 20,000 people have sought refuge at U.N. facilities in Juba, the capital, since fighting started on Sunday, and on Tuesday the United States ordered its citizens to leave South Sudan immediately. 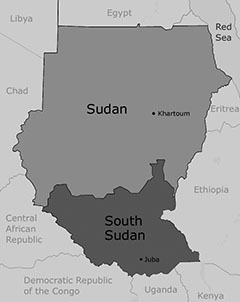 Meanwhile, EgyptAir said it resumed its flights to Juba after a three-day suspension. Head of EgyptAir holding company Hossam Kamal said the flights were resumed after ensuring that conditions are stable in the Juba airport

South Sudan President Salva Kiir said in an address to the nation on Monday that his government had foiled a coup attempt by a group of soldiers loyal to former Vice President Riek Machar, who is now the subject of a manhunt by Sudan’s military. Foreign Minister Barnaba Marial Benjamin said today that Machar is believed to have fled Juba and that the government believes he is in hiding.

At least 10 political leaders have been arrested over their roles in the alleged coup, the government said late Tuesday.

The clashes are pitting soldiers from the majority Dinka tribe of Kiir against those from Machar’s Nuer ethnic group.

Casie Copeland, the South Sudan analyst for the International Crisis Group, said key Nuer leaders in the army are defecting in Jonglei, in an escalation of the conflict.

“The situation is no longer contained to Juba. This extension of conflict to the state-level is deeply concerning and poses serious challenges for ongoing efforts to reduce hostilities,” she said.

Tension had been mounting in South Sudan since Kiir fired Machar as his deputy in July, sparking concerns about possible tribal clashes. Machar, who has said he will contest the presidency in 2015, said after he was fired that if the country is to be united it cannot tolerate a “one man’s rule or it cannot tolerate dictatorship.” His ouster, part of a wider dismissal of the entire Cabinet by Kiir, had followed reports of a power struggle within the ruling party. At the time, the U.S. and the European Union urged calm amid fears the dismissals could spark political upheaval in the country.

The alleged coup attempt took place Sunday when some soldiers raided the main army barracks’ weapons store in Juba but were repelled by loyalists, sparking gunfights across the city, according to Benjamin. The government has given few details, raising questions about what sparked the violence.

Angelo Izama, a Ugandan analyst who runs a regional security think tank called Fanaka Kwawote, said that the “coup narrative is weak and was preceded by what appeared to be a direct challenge to Kiir’s political authority.”

South Sudan has been plagued by ethnic violence since it peacefully broke away from Sudan in 2011 after decades of civil war.