AUSTIN — Second-grader William Lawhead, a huge Minnesota Vikings fan, summed up being able to watch the last game in the Metrodome with one word: Awesome. 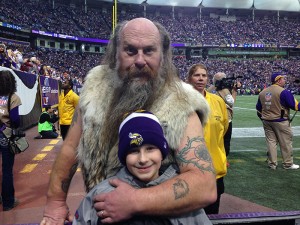 William Lawhead, a Southgate second-grader, poses Sunday with Vikings’ mascot Ragnar at the final game at the Metrodome. –Submitted

The Southgate Elementary student has gone with his dad, Brandon Lawhead, to almost every Vikings home game this season. And with seats near the sideline in the end zone, William got to meet several of the historical mascots, and former Vikings center and Pro Bowler Matt Birk, who were on hand Sunday for the stadium’s sendoff as the Vikings’ took down the Detroit Lions 14-13. William was even on the Jumbotron right before the postgame ceremony.

William, whose favorite player is Adrian Peterson, said it was “pretty exciting” to meet the mascots, and “pretty awesome” to be on the Jumbotron.

“He loves to go to games,” said Brandon, a lawyer at Lawhead Law Offices in Austin. “I think he really enjoyed the whole experience.”

Brandon, who has been a fan his entire life and had even gone to some games in the Vikings’ previous home, Metropolitan Stadium, said he has fond memories of the Metrodome. 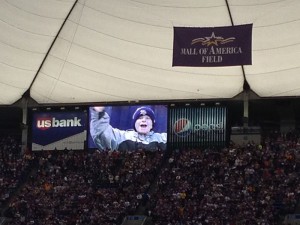 William Lawhead, a Southgate second-grader, smiles on the Jumbotron at the Metrodome Sunday during the final Vikings’ game at the stadium.

“I thought it was a nice experience. Ever since I was a child, that’s the stadium that I’ve gone to,” Brandon said, adding that he was surprised at the fan turnout Sunday given the Vikings’ 5-10-1 record.

He said he was surprised at how many fans find the Vikings’ home from 1982 to 2013 meaningful, even though those years were filled with more heartbreak than championships. The Minnesota Twins won two World Series while they called the Metrodome home though, he added.

“I was surprised by how many people stayed for the ceremony afterward,” he said.

But then again, he and William stayed. And William wouldn’t have missed it.