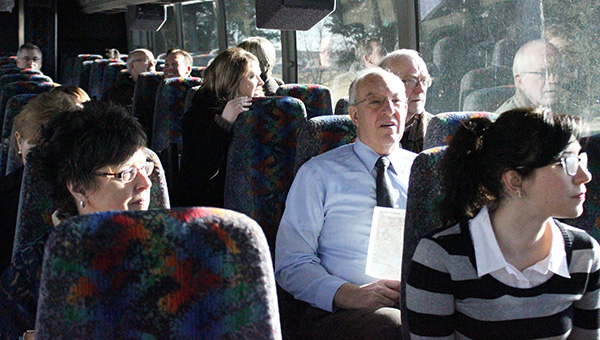 The chairman of the Senate Capital Investment committee said Thursday he is optimistic about the local requests for state bonding funds presented on the committee’s tour around the state.

While in Albert Lea, the senators heard requests for $7.5 million to go toward the $15 million dredging of Fountain Lake and for $500,000 to finish the Blazing Star Trail extension from Myre-Big Island State Park to Hayward. They heard a request for funding for the Cedar River Watershed District.

Sen. LeRoy Stumpf, DFL-Plummer, said he has been to Albert Lea before and has watched steps being taken for the dredging project.

“It’s something the community has a lot of enthusiasm for,” Stumpf said. “They have a good plan and a long vision and a short-term vision for achieving that. I feel good about the project.” 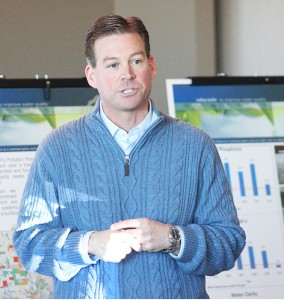 Stumpf said with the positive state budget forecast that came out this week, he feels comfortable supporting a larger bonding bill than in years past, somewhere between $800 million and $1 billion. There’s at least three times that amount of projects to consider.

“It’s a great time to invest in the core infrastructure of our state,” said Stumpf, noting that the state is getting to a point where much of its infrastructure needs to be replaced.

He said he plans to meet with DFL Gov. Mark Dayton next week to discuss the bill.

The senators met at Wedgewood Cove Golf club to hear the local requests after a brief tour of Fountain Lake by bus.

“Fountain Lake is a treasure that we have,” said Randy Kehr, executive director of the Albert Lea-Freeborn County Chamber of Commerce.

He talked about the recruitment value of the lake for local businesses and said the quality of life here often is the deciding factor of whether a person or family moves to town.

The tour started at the Edgewater Bay Pavilion, went around a portion of Fountain Lake, through part of downtown Albert Lea and ended at Wedgewood Cove. 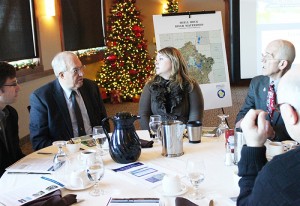 The project is necessary because the lake has become filled with sediment — as much as 5 to 8 feet in some areas. The accumulation has resulted in water quality impairment and large algae blooms.

If the state money is obtained, the remainder of the project would be financed through matching funds from local, federal and other grants.

The cost of the project comes from the dredging itself, along with studies, permits, land acquisition and construction.

Craig Hoium, Austin community development director and ex-officio member of the Blazing Star Trail joint powers board, presented information about the request for $500,000 for the extension of the trail from the state park to Hayward. The money specifically would cover the last mile and a half stretch of the extension — from the edge of Albert Lea Lake to Hayward.

Hoium said there are presently 13 miles of trails in Albert Lea and 14 miles in Austin. 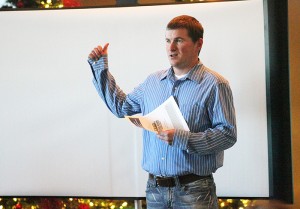 Justin Hanson with the Cedar River Watershed District speaks Thursday during a presentation for bonding dollars in Albert Lea.

There is a hope the trail will someday extend past Hayward to the west city limits of Austin and the Shooting Star Trail.

The Blazing Star Trail presently begins at Frank Hall Park in Albert Lea and goes to a point on the northeast side of Myre-Big Island State Park, about a three quarters of a mile from the western shore of Albert Lea Lake’s northern bay.

Hoium said if everything is on schedule, construction could begin early summer.

The extension would be 2.9 miles and would include a bridge over Albert Lea Lake. Once it is completed, it would be turned over to the Minnesota Department of Natural Resources for maintenance.

Justin Hanson with the Cedar River Watershed District talked about the district’s efforts to reduce flooding in Austin and the need to reduce water runoff throughout the entire district.

He requested $1 million in state bonding funds to go toward a $1.5 million effort to reduce water flow coming into the Cedar River. District officials hope to build detention structures in five areas of the watershed.

The project will reduce infrastructure damage in Austin during floods, protect farmland, improve the recreational value of the Cedar River and stimulate wildlife habitat within the river.

Hanson said the project is expected to reduce flows by 8 percent.

District 27 Sen. Dan Sparks, who is a member of the committee, thanked his co-senators for coming to Albert Lea to listen to the project proposals.

The senators were headed next to Owatonna.