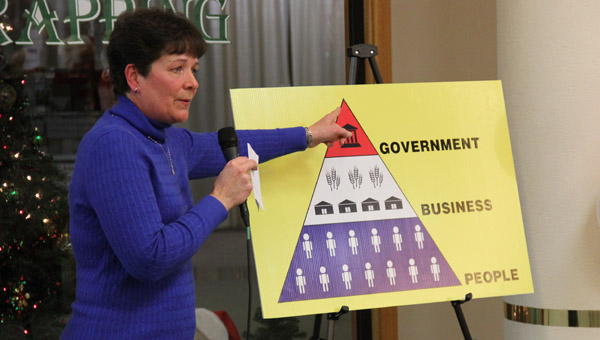 First-grade teacher Peggy Bennett of Albert Lea explains a pyramid that describes how she feels government should work. She then turned it upside to illustrate her point. — Tim Engstrom/Albert Lea Tribune

Her principle is this: “We the people are the answer.”

Bennett, a Republican from Albert Lea, made her announcement at Northbridge Mall to an audience of 80 people.

“We need to listen to the people,” she said. 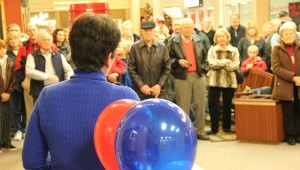 A crowd of about 80 people gathered Monday at Northbridge Mall in Albert Lea to hear first-grade teacher Peggy Bennett declare her Republican candidacy for House District 27A.

Bennett is the second Republican to seek the nomination in House District 27A. The other is firearms seller Milan Hart of Albert Lea, who announced his intentions in late September. Filing for state candidacies begins May 20 and closes June 3. The primary election is Aug. 12.

Bennett had an easel with a sign on it of a pyramid. It had government at the top, businesses and farms in the middle and, as a foundation, people. She turned it upside down and said political leaders are thinking about their interests and not about the people.

Last spring, she was contacted by local Republicans who thought she would make a good state representative. She had never considered running.

In grade school, she told herself she would never be a teacher. Then she ended up being a teacher.

“As a young adult, I said, ‘I would never get involved in politics,” she said.

Over the summer, Bennett consulted friends and prayed, ultimately deciding to go for it for the sake of her children, “more than 750 of them.”

Bennett, who has no spouse or children, was referring to her students. She has been teaching for 33 years.

She grew up in White Bear Lake and Mound, graduated from Crown College and got her first teaching job in special education in Albert Lea in 1981. She taught her third year in Wells following a round of cuts, then came back to Albert Lea to teach transitioning from special to regular education for seven years before becoming a first-grade teacher. She has a master’s degree from St. Cloud State University.

Albert Lea lawyer and former state Rep. Henry Savelkoul, who was elected in 1968 and served the Albert Lea district through 1978, introduced Bennett as the 2011 Teacher of the Year winner and someone respected in the local education field. He called her campaign “a needed change.”

“She is a person who can add a new light and a new standard to politics in this district,” he said.

Bennett said the political process has too much extreme partisanship and name calling.

She said she opposes a new sales tax on farm equipment repair, which sends business over the border to Iowa. The same, she said, goes for a new warehouse tax.

“They are now taxing nonproductivity and that doesn’t make any sense,” she said.

The taxes were passed in 2012 by a DFL-controlled Legislature and signed by DFL Gov. Mark Dayton.

Bennett said she was glad to see state leaders approving funding for all-day, everyday kindergarten, but then she was sad to learn they had shaped the funding formula to cut back on funding other grades in future years.

Hart and Bennett said no matter who wins the GOP nomination, they would support the winner. 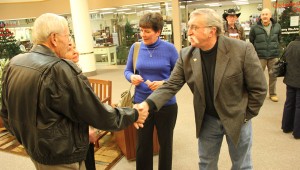 District 27A candidate Peggy Bennett introduces her opponent, Milan Hart, to her parents Monday at Northbridge Mall. Hart and Bennett will vie for the Republican endorsement.

“The GOP needs to win this district,” Hart said.

He said he sees not many differences between the two candidates on issues, adding that he grew up on a farm, served in the military and has experience running his own business.

Hart said he owes his success to a teacher.

Bennett said her work on curriculum and technology within the district shows she is someone who can gain ground with people who don’t agree. She plans to take a leave of absence during the campaign.

Hart and Bennett agreed they are prepared to go through the mudslinging of a tight campaign next fall against Savick. District 27A faced unprecedented spending from outside sources in 2012, when Savick upset GOP state Rep. Rich Murray. Many see the district as a bellwether for the state.

Bennett said she would not run a negative campaign. She would compare candidates, but declared she would not call names. She said Savick voted too often with the interests of DFL’ers in the Twin Cities, citing the recent taxes as examples.

“We need someone who listens to both sides,” Bennett said.

Savick, reached by phone, said such statements show a lack of understand of the political process. She said legislators voted on an entire omnibus tax bill that came out of a joint House-Senate conference committee. It’s the result of compromises, and there isn’t the opportunity to vote on one tax or another.

She said she has been commended by the Coalition for Greater Minnesota Cities for working with other rural legislators to get $20 million for Greater Minnesota back into the funding formula for local government aid. She said they were ready to vote against fellow Democrats on the tax omnibus bill if the funding, which had been turned over to the metro area, wasn’t returned.

Savick also noted she has been commended by firefighter associations for working to get a tax credit for rural firefighters.