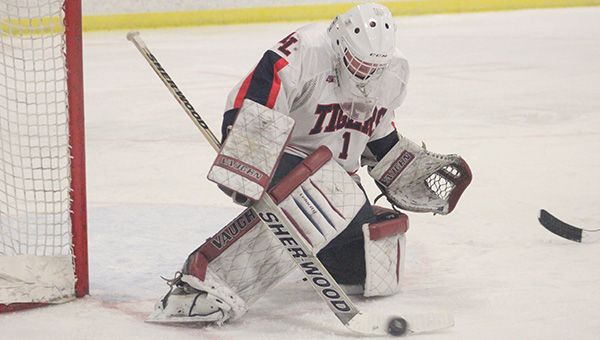 When a team is rolling, goals come in bunches. Albert Lea was rolling in the first and final period on Tuesday night. 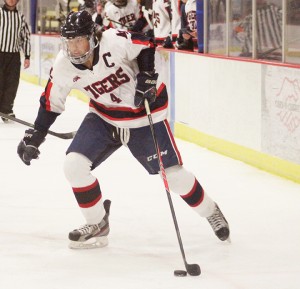 “We got off to a pretty good start and had some pretty nice goals,” head coach Roy Nystrom said. “We scored the goals when we needed to score them. Northfield has a good club. They’re young, but they were moving their feet, and they took it to us in the second period, but we came back in the third.”

Senior forward Van Zelenak had a hat trick. He scored the Tigers’ first goal and lit the lamp twice more in the third period.

“He’s got a good shot. He’s good around the net, and he showed it tonight,” Nystrom said. “When we needed a goal, he came through and got one for us.”

Jack Pulley and Kohl Kriewall had Albert Lea’s other goals in the first period. Northfield got its only goal of the game with less than one minute left in the second period.

Albert Lea had 25 shots on goal. Junior Garrett Matz had 33 saves for the Tigers.

Northfield and Albert Lea are in the same section, which means even though it’s early in the season, the win could help the Tigers when the postseason is seeded. Albert Lea was eliminated in sections last season by Northfield.

“It’s an important win for us because it’s a section victory,” Nystrom said. “At the end of the year when we have to rank the teams, this game is going to go down as one that was very important.”

Nystrom said he wanted to finish in the top four of the section, and that tonight “was a good start.”

The Tigers were guilty of two five-minute major penalties, one near the beginning of the game and one at the end. Albert Lea killed off 3 minutes of the first penalty before Northfield evened things up sending one of its own to the box. Nystrom said he didn’t see either penalty clearly, but more discipline is something he’d like to see.

“A lot of times guys turn their backs, and thats what (the team) was telling me,” he said. “You tell your kids, ‘When you see the numbers, you have to slow down and you have to back off.’ But we killed off penalties pretty well, I thought.”

The Tigers will be back in action when they travel to Faribault on Thursday.

View the box score in the Scoreboard: Dec. 10 post.