Tigers fall to Huskies in OT 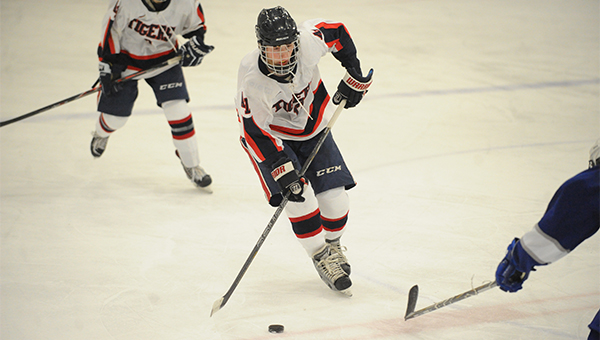 Matt Cheever of Albert Lea takes the puck up the ice Thursday during a 2-1 overtime loss to Owatonna in the Tigers’ home opener. — Micah Bader/Albert Lea Tribune

The Albert Lea and Owatonna boys’ hockey teams ended regulation with a 1-1 tie for the second straight time.

Last year, the eight-minute overtime period in Owatonna expired with no scoring.

On Thursday, the Huskies broke the stalemate at the Albert Lea City Arena with 5 minutes and 45 seconds left in overtime to win 2-1.

“It was a good hockey game. A barn-burner,” Albert Lea head coach Roy Nystrom said. “We always have barn-burning games with Owatonna, and this was no different.”

The Huskies had the upper hand in the first period out-shooting the Tigers 8-3. However, Albert Lea junior goalie Garrett Matz held his ground and stopped each attempt. Over the course of the game, he grabbed 31 saves.

Owatonna was poised to score in the second period when Albert Lea’s Wyatt Paulsen landed in the penalty box for five minutes. However, the Tigers defense held off the Huskies until they were back at full strength.

Three straight penalties in the second period by Owatonna gave Albert Lea multiple chances to score on the power play.

Senior wing Van Zelenak cashed in for the Tigers with 2 minutes and 6 seconds left in the second. Fellow senior wing Andrew Thompson earned the assist.

In the third period, shots on goal were neck and neck. Albert Lea had six. Owatonna, seven. Four minutes into the period, Owatonna tied the game. No one else scored in regulation, and after a 3-minute break, and 8-minute overtime period began.

“It’s about where you are going to get the shots from. A lot of the shots we took were not from very good spots,” Nystrom said. “We did have some good chances, but you’ve got to score when the opportunity is there. We didn’t, and they did.”

The schedule doesn’t get any easier, Nystrom said. The Tigers host Northfield at 7:30 p.m. Tuesday.

“That’ll be another tough game,” he said. “Every time we play it’s going to be a really tight battle. There aren’t going to be any breathers.”

Northfield is 1-2 overall. The Raiders won their season opener 5-1 against Dodge County, but they’re coming off losses to Rochester Lourdes and Bloomington Kennedy. The matchup at Albert Lea is Northfield’s first road game of the season.