Hagen, the North Iowa Conference Player of the Year and an All-State honorable mention selection, led the area with 758 assists. She also chipped in 157 kills, 74 blocks and 38 ace serves.

Ladwig led the area with 310 kills and was fourth in the area with 278 digs. She also managed to be in the top 10 in blocks with 29 solo stops and 30 block assists that resulted in a point for the Tigers. 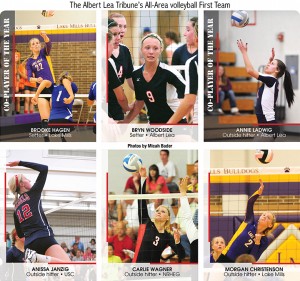 Janzig led the Rebels at the net with 285 kills, the third most in the area. She was one of only two players in the area to surpass 80 blocks with 81. Janzig’s hitting success rate was 86 percent, and she had 99 digs.

Woodside led the Tigers from the setter position with 658 assists, which was second-most in the area. She finished in the area’s top 12 with 172 digs. Woodside also had 24 ace serves in 78 games this year.

Wagner was second in the area with 287 kills, and her dig total of 274 was fifth. At the net, she earned 65 blocks, which was fifth-most in the area.

Christenson had more than twice as many ace serves as anyone in the area with 92. The All-Conference and All-District outside hitter was also a weapon at the net with 191 kills and 50 blocks.

Ziebell finished in the top 10 in the area in kills, digs, blocks and ace serves. She was third in the area with 290 digs and 75 blocks, and she added 170 kills and 33 ace serves.

Madson was the only player in the area to surpass 400 digs with 412. She also was tied with Tara Bauman of United South Central and Taryn Van Ryswyk of Northwood-Kensett with 29 ace serves.

Shifflett was one of five area players to surpass 200 kills. She was a strong presence at the net with an area-high 88 blocks and 222 kills. Shifflett was a North Iowa Second Team All-Conference selection.

Keyeski led the Tigers’ back row with 378 digs and 459 serve receives — she was one of only two players in the area to surpass 300 digs. Keyeski also was a threat when serving the ball. She finished with 36 ace serves.