Tribune volleyball Players of the Year: Ladwig and Hagen 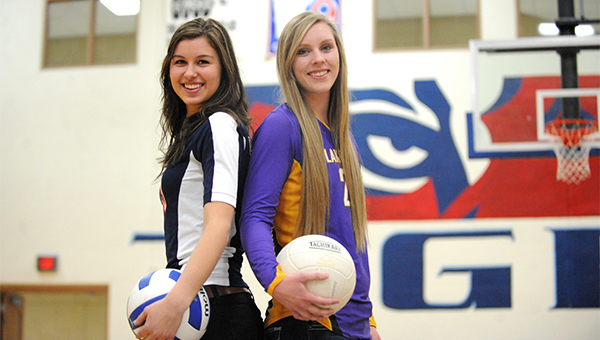 Annie Ladwig, left, of Albert Lea and Brooke Hagen of Lake Mills stand together in the Albert Lea High School gymnasium Friday after being recognized as the Tribune’s Players of the Year. — Micah Bader/Albert Lea Tribune

The Albert Lea volleyball team rode strong hitting to its best overall record since 2006, and Annie Ladwig was a big part of the that success.

Ladwig was the only hitter in the Tribune’s seven-team coverage area to surpass 300 kills. In 25 matches and 79 games, she totaled 310 kills.

However, not being concerned with personal stats, Ladwig had one goal this year.

“I wanted to have a winning season because Albert Lea hadn’t had one for a while,” she said. “We accomplished that and even got a bye for the first round (of the Section 1AAA tournament).”

This year, Albert Lea compiled a 15-10 overall record with a 6-3 mark in the Big Nine Conference, which put the Tigers at fourth place in the conference standings. Only Owatonna (7-2), Rochester Mayo (8-1) and Mankato West (8-1) finished higher in the 10-team conference.

Mankato West won the Big Nine regular season title because of a head-to-head win over Rochester Mayo and compiled a 27-3 record, but on Oct. 1, the Tigers went on the road and beat the Scarlets 3-1 to snap their 17-game winning streak.

“Beating Mankato West, that was definitely a highlight and also placing so high in our conference,” Ladwig said.

Along with continuing the leadership role she began before Albert Lea head coach Lisa Deyak took over the program, Ladwig assisted with the development of other hitters this year, Deyak said.

“Annie is a model for all our other players,” she said. “She’s not only a great model in the front row but the back row, too. It’s definitely easier to teach a skill and motivate other players when they can watch Annie and learn from her skill and dedication.”

In the offseason, Ladwig plays club volleyball in Burnsville.

“She has been a dedicated player for Mizuno Northern Lights for at least the last five seasons where she was able to play the game at the highest level,” Deyak said. “She knows there is always room for growth and improvement.”

“She’s been my setter for three years,” Ladwig said. “That was nice to have consistency with her.”

Ladwig is undecided on college plans, but she said she hopes to make a decision before Christmas.

Everyone on the Lake Mills volleyball team’s starting lineup was a new face this year, except for Brooke Hagen.

After posting a perfect regular season record, (43-0) and qualifying for the state tournament in 2012, the Bulldogs were in rebuilding mode this year. However, Hagen and the new starters proved they could also play on an elite level by putting together a 35-6 overall record and winning the regular season North Iowa Conference crown.

“A lot of people doubted us and said we wouldn’t get as far as we did or play as well as we did,” Hagen said. “I’m really proud of my teammates for everything we’ve accomplished.”

Hagen, a senior and the Tribune’s All-Area co-Player of the Year, was a big reason the Bulldogs won 83 percent of their matches. She coordinated Lake Mills’ offense from the setter position and led the area with 758 assists.

Setter wasn’t always Hagen’s position, she said. Until her freshman year, she was a left-handed right-side hitter.

Lake Mills head coach Jim Boehmer said coaches can decide a player’s position too early, but his staff has works to avoid that.

“She was not a setter (before high school), but we saw potential, the left hand and some intangibles that would serve her well in the setter position,” he said. “Thank goodness we did (change positions), because she is a special player today.”

Hagen was recognized as an All-State honorable mention and All-District selection, and she was the NIC Player of the Year this season.

Boehmer said Hagen took a leadership role this summer in the offseason.

“She began to become a more vocal leader and a team leader in practice,” he said. “This is a skill she worked on all season and is still developing as she takes her game to the college level.”

The work in the offseason helped offset the inexperience in the lineup, Hagen said.

As a student of the game, Hagen spent time in the film room.

“Brooke would watch tape and look at her numbers to see what she did well and what she needed to improve on,” Boehmer said. “She wanted to know that information and break it down to improve her performance the next night out.”

Hagen said she plans to continue her volleyball career at Bethany Lutheran College in Mankato.