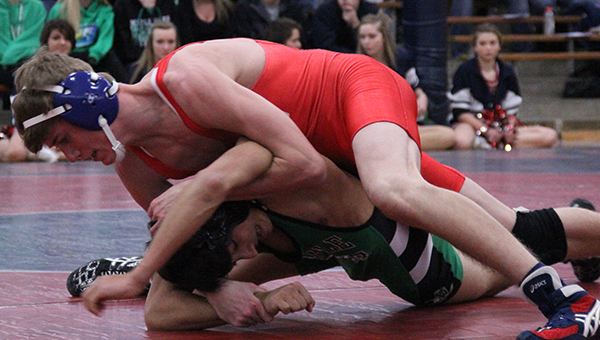 WELLS — With some holes in his lineup, United South Central wrestling coach Marcus Eytcheson knew it would be tough for the Rebels to get a win over Maple River, but he was happy they kept it close.

The Rebels fell 40-30 to Maple River in a back-and-forth dual on Thursday night.

“Honestly with the kids that we have ineligible right now and how many holes we have, we really didn’t know if it was even going to be this close,” Eytcheson said. “We were in a position to win.”

The meet was full of pins and forfeits by both teams. Each team had three pins and USC forfeited two bouts while Maple River forfeited one.

USC’s Kyle Brandt got the party started at 106 pounds by getting a 13-6 victory in the night’s first match. Maple River tied things up at 113 pounds with a 5-2 win.

“Adam is starting to get his season put back together, he’s had a tough start and a few tough matches,” Eytcheson said. “And that’s just what Dylan does for us, he has the school record for falls now and his senior year just got started.”

Eytcheson said he was disappointed that the 152-pound match was forfeited because he was looking forward to seeing Derek Herman wrestle.

“Their 152-pounder is ranked below ours, but we thought it would have been a good match,” he said.

After nine of 14 matches, the Rebels had a 24-15 lead, but Maple River came storming back, aided by a USC forfeit, a pin, a major decision and a minor decision. USC lost the 182-pound match because of two unsportsmanlike points awarded to Maple River.

“One of our kids couldn’t keep his head in the match, and that cost the team pretty badly,” Eytcheson said. “He got kicked of the team here after the match, so hopefully we won’t have to worry about that again this season.”

Eytcheson said he was sending a message that late hits and behavior like throwing head gear after the match won’t be tolerated.

Maple River got another pin in the 195-pound match to extend its lead to 34-24. USC cut the lead to four when Colten Carlson earned a pin at 220 pounds. Maple River closed out the dual with a pin at 285 pounds.