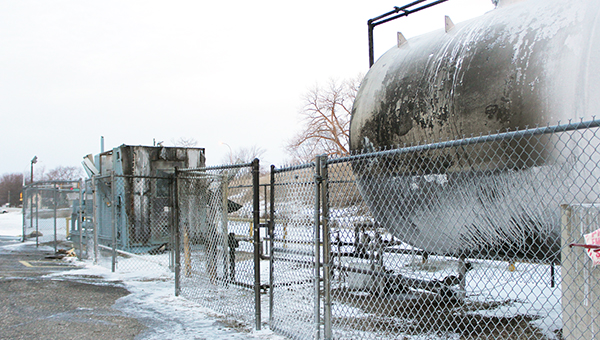 A vaporizer on the north end of Streater exploded Sunday night. The State Fire Marshal’s Office has been called in to investigate. –Sarah Stultz/Albert Lea Tribune

A vaporizer next to an LP tank exploded outside Streater Inc. Sunday night with a boom that could be heard and felt several blocks away.

Albert Lea Police Chief Dwaine Winkels said shortly after 9 p.m. gas vapors from an LP tank on the north side of the building ignited the vaporizer, which was about 15 to 20 feet away. The LP tank itself did not get hot enough to explode.

“Had that happened, this would be a different story,” Winkels said.

Albert Lea firefighters were dispatched to the business, at 411 S. First Ave.

He said after the explosion, “calls came in frantically” to dispatchers from nearby residents.

One of those calls was from a person who stated that a vehicle had hit a house on First Avenue and that the car and house were on fire. A second crew was dispatched to that call but found it to be unfounded and related to the explosion.

Winkels said police blocked Main Street on the north side of the building near the viaduct for about a half hour as firefighters responded to the scene.

Neighbors took to social media outlets to post about their experiences and to find out any information about what had happened. Information was limited until this morning.

Winkels said the damage was limited to the equipment at the site, and no one was working when the explosion occurred, he said. The vaporizer was the size of a small shed.

Kevin Davis, Streater management spokesman, said the company used the LP gas in the case of a break in Alliant Energy service.

Davis said the company is thankful for the quick response by Albert Lea firefighters and police and that no one was hurt.

He said the gas in the tank has been stabilized and will be removed as quickly as possible.

Employees at the plant were already on a pre-scheduled holiday break and are not expected to return to work until Thursday.

Davis said the state fire marshall’s office has been called to investigate.