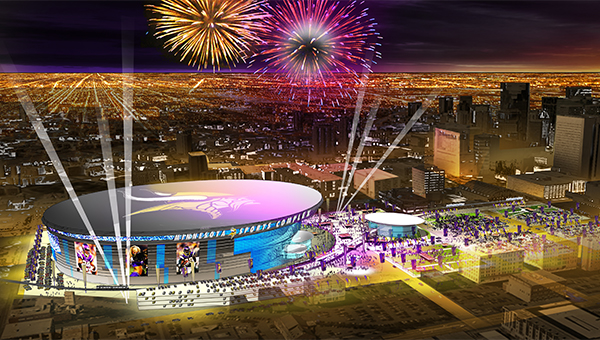 This is an architectural rendering of the view of downtown Minneapolis with a finished Vikings stadium. — Courtesy of Minnesota Vikings

After more than a decade of wrangling, work begins

MINNEAPOLIS — Zygi Wilf beamed in the middle of the sharp-dressed group, a gold-painted shovel in his hands, a purple Vikings hard hat on his head and star running back Adrian Peterson by his side.

Finally, the work on Minnesota’s polarizing and long-sought new stadium was under way. 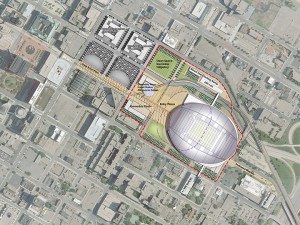 This is what the future of eastern downtown Minneapolis is slated to look like. — Courtesy of Minnesota Vikings

After more than a decade of planning, dealing and pleading, the $1 billion project began Tuesday with a formal groundbreaking in downtown Minneapolis. About 600 people, including local politicians, business leaders and chanting fans, were in attendance as Wilf, Peterson, Gov. Mark Dayton and many others took turns flipping dirt and smiling for photos as fireworks exploded overhead.

The grinning and digging took place in the parking lot next to the Metrodome, where the Vikings have played since 1982. Their last game there is Dec. 29, and a three-month demolition of the Teflon-topped stadium will start in mid-January. After two years outdoors at the University of Minnesota, the Vikings are scheduled to inaugurate the ship-shaped, glass-encased venue in time for the 2016 season.

During a set of speeches in a nearby tent, Dayton joked that he felt just like Vikings coach Leslie Frazier after the team’s 23-20 overtime victory Sunday over Chicago.

State lawmakers enacted a bill last year to fund the stadium with the threat, real or perceived, of the 52-year-old franchise moving to Los Angeles hovering over the often-tense process.

Many of the same hard-core, costumed fans who camped out at the state Capitol to help lobby for a deal were at the event Tuesday, their presence recognized by Minneapolis Mayor R.T. Rybak.

The public is on the hook for roughly half the cost: $498 million. The NFL and Vikings are handling the rest, with much of the team’s share coming from corporate naming rights and fees on season ticketholders, known as personal seat licenses.

Many lawmakers and citizens have railed against the project since it was first raised as a possibility around the turn of the century when Red McCombs owned the team. Dayton was a driving force behind the legislation, but even he publicly criticized the Vikings for the proposed PSLs.

The Vikings recently pledged to increase their contribution to more than $500 million to make sure the project has all the top-end amenities they want, like high-definition televisions in extra-wide concourses.

“Whatever that took to get that done, we had to step up because our fans are what this is all about,” Mark Wilf said in an interview after the event. He added: “When it’s actually here and you see the shovels out there beginning to dig, it’s exciting.”

It’s also a nice respite from a challenging season.

The Vikings have gone from a 10-6 playoff team in 2012 to a 3-8-1 mess this year. And the Wilfs, who built their fortune in a family real estate business, were ordered in September by a New Jersey court to pay $84.5 million to two former business partners the judge ruled they defrauded in a deal forged in the 1980s.

So this event was a true highlight.

“This is a positive, exciting and great project, and that’s been our focus,” Mark Wilf said. “I think as the project goes up, as people start seeing the frame go up, and the building become a reality over these next 2 1/2 years, and the jobs being created and the excitement being generated, I think it’s going to be something that all Minnesotans can appreciate.”

Mark Wilf declined to answer a question about the performance of Frazier and general manager Rick Spielman.

“We’re of course disappointed in our season. We didn’t expect to be where we are,” he said. “One of our goals was to get the stadium project built and have a great facility but our ultimate goal is to win championships and Super Bowls.”

Away from the festivities, a collection of conservative groups and lawmakers held a counter-event to try to keep focus on the stadium’s heavy taxpayer subsidy. They described the financing as shaky, noting that a prior plan to pay for the $350 million state share through electronic gambling has fallen woefully short of projections. Lawmakers plugged the gap in a stadium account this year with a one-time diversion of tobacco taxes and for the future with a corporate tax.

“It’s a bad day for Minnesotans,” said Republican state Sen. Roger Chamberlain. “We’re talking about taxpayers paying for Zygi to walk away with hundreds of millions in his pocket if he sold the team, not to mention the increased annual profits. This is not about having football or no football, stadium or no stadium. We could have done this a better way.”

The stadium plan also relies on $150 million in city taxes from Minneapolis.