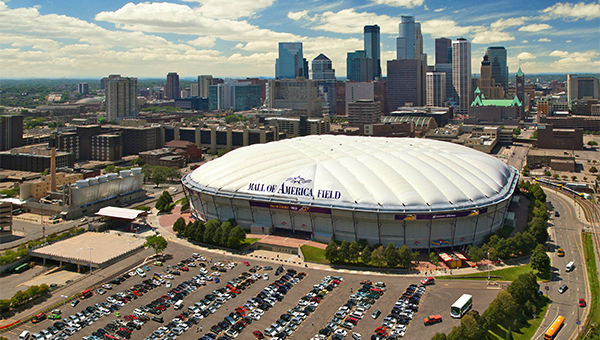 The Metrodome sits in downtown Minneapolis. The Minnesota Vikings will play their last game under the Teflon-topped dome on Mall of America Field against the Detroit Lions at noon Sunday. — Courtesy Minnesota Vikings

Building may not be only reason for post-game goodbyes

MINNEAPOLIS — The Metrodome will be torn down, beginning next month. Detroit will be Minnesota’s final opponent under the Teflon-topped stadium.

The building might not be the only recipient of the post-game goodbyes.

Lions coach Jim Schwartz has watched his team drop five of six games to lose control of the NFC North, one year after losing eight straight to finish 4-12. Vikings coach Leslie Frazier will finish with at least 10 losses for the second time in three seasons. Both sideline bosses have taken their team to the playoffs within the last two years, but a failure to do so this time could prompt a postseason firing by their respective organizations.

Frazier felt the tension palpably enough to broach the subject with his players this week.

“It’s like the elephant in the room. I just felt like I needed to get that addressed,” Frazier said. “Looking back at it, I probably should have dealt with it a week ago. Don’t want those guys to be distracted.”

The Vikings lost at Cincinnati last week 42-14, but they’ve essentially been out of contention since October.

The Lions, however, were 6-3 after winning at Chicago in November and still 7-5 after dismantling Green Bay on Thanksgiving Day. Their 4-1 division record gave them the tiebreaker edge. But here they are on the verge of an irrelevant game against the Vikings, after which the Bears and Packers will play for the NFC North title. Had the Lions, who held a fourth-quarter lead in each of their last five losses, won one more game they’d only need to beat the Vikings to be division champions for the first time in 20 years.

“It’s been the quintessential close but no cigar. We’ve battled every single game, but we’ve come up a play short consistently,” Schwartz said.

“Whatever decisions are made, they’re going to be made without our input as players,” wide receiver Nate Burleson said. “All we control is what we do for a living and how we play on Sunday.”

The Vikings have been expressing the same above-our-pay-grade sentiment about Frazier, who is 20-32-1 plus one loss in the playoffs. He took over for the last six games of the 2010 season.

“What we say is not going to carry any weight,” wide receiver Greg Jennings said. “I love him as a head coach. I think he’s doing an outstanding job of keeping the team together, and we’re going to continue to fight.”

Here are five things to know about the game beyond the uncertain status of the head coaches:

STAFFORD SLIPPING: With 14 turnovers, including 12 interceptions, over the last six games, Lions quarterback Matthew Stafford has been struggling, though he’s again near the top of the NFL in yards passing.

DISMAL DEFENSE: The Vikings have allowed a league-most 467 points, just 18 away from establishing a dubious franchise record. They gave up 484 points in 1984, when they finished 3-13.

EARLY END: Calvin Johnson had an NFL-record 1,964 yards receiving for the Lions last year, breaking Jerry Rice’s mark. Adrian Peterson rushed for 2,097 yards for the Vikings, nine short of Eric Dickerson’s all-time single-season record. Neither of them had the same impact this year, and injuries played a part in that.

Johnson is second in the league with 1,492 yards receiving. Peterson is third with 1,266 yards rushing.

METRODOME MEMORIES: The Lions are 7-23 in their history at the Metrodome, which took a sponsored name, Mall of America Field, in 2009. The Bears finished 12-20 there, including a win in the playoffs after the 1994 season. The Packers went 15-16.

Both coaches will remember the noise.

“Sometimes after those games it takes about 48 hours to get that Viking horn out of your head. It just keeps ringing,” Schwartz said.

Said Frazier: “That’s going to be hard to duplicate, almost anywhere it seems.”

CURTAIN CALL: Peterson will join former Vikings players Matt Birk and Robert Smith and ex-coach Bud Grant in addressing the crowd after the game, following a highlight video to be shown of the stadium’s 32 seasons.

The typical Minneapolis police force for a game has been doubled to help prevent fans from trying to damage or take pieces of the building.