A former Oakland woman charged in Freeborn County District Court in March with mistreating horses has pleaded not guilty to her charges. 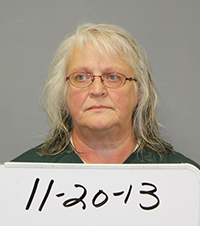 Theresa Lynn Halsey, 60, of Austin, entered the plea Thursday and invoked her Sixth Amendment right to a jury trial.

Halsey said in a prior interview with the Tribune that she was shocked by the charges that allege she deprived the horses of food and shelter.

She hopes her name can be cleared.

Halsey said she and her husband had owned the horse that died for about seven years and each winter it would lose weight and then regain weight in the summer.

The day the horse died, she said, he had fallen on the ground with his front legs on one side of a post and his back legs on the other side of the post. He was unable to stand up because he was so weak, and while trying to stand up he rubbed his body against the post, creating a wound.

Halsey said the struggle of not being able to get up, combined with the horse’s weight and age, contributed to his death.

Halsey was arrested in November on a warrant for failing to appear for her initial court hearing on the charges.

The date for her next hearing has not yet been set.