MINNEAPOLIS — Hundreds of gay and lesbian couples married in Minnesota, beginning at the stroke of midnight on Aug. 1.

A cultural shift culminated when Cathy ten Broeke and Margaret Miles became the first of 67 couples to marry at Minneapolis City Hall with Mayor R.T. Rybak presiding. The scene was repeated across the state that day, just nine months after Minnesota voters rejected a proposed constitutional amendment that would have defined marriage as the union of one man and one woman and 2 1/2 months after Gov. Mark Dayton signed a bill making Minnesota the 12th U.S. state to legalize gay marriage. 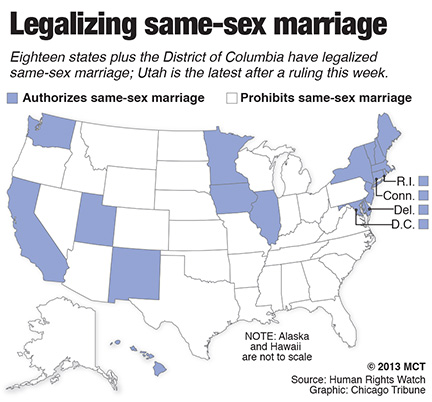 No one has kept a tally of how many same-sex couples have tied the knot statewide, but an Associated Press count found at least 1,640 lesbian and gay couples applied for marriage licenses by the end of August. State officials anticipated about 5,000 couples would take advantage of the new law in its first 12 months.

The legalization of gay marriage was Minnesota’s top story of 2013. In no particular order, here’s a look at some others that also had an impact across the state:

Jennifer Haselberger, a former canon lawyer for the Archdiocese of St. Paul and Minnesota, became a whistleblower and tipped news media to new allegations of child sexual abuse by priests — and top church officials’ failures to address the problem. Police launched investigations. In December, under increasing public pressure and a court order, the archdiocese published a list of 34 priests accused of sexually abusing minors. Archbishop John Nienstedt publicly apologized Dec. 15 at an Edina church for overlooking the issue for too long. Two days later, he announced he would step down from public ministry while police investigate an allegation that he improperly touched a boy during a group photo session four years earlier — a claim Nienstedt strongly denied.

The Oct. 1 launch of MNsure, Minnesota’s new online health insurance marketplace, did not go well, and bugs with the website, long waits on the telephone helpline and other glitches persisted for weeks. Executive Director April Todd-Malmlov abruptly resigned in mid-December after coming under fire for taking a nearly two-week tropical vacation in late November despite mounting problems. With signup deadlines looming, Dayton apologized Dec. 19 for what he called “the failures of MNsure” and promised round-the-clock efforts to fix the system.

A long-running federal investigation into what prosecutors called a “deadly pipeline” that funneled money and men from Minnesota to Somalia resulted in prison sentences in May for two women and seven men accused of aiding the terrorist group al-Shabab. Since 2007, at least 22 young men have left Minnesota to join the al-Qaida-linked group, which has been at the heart of much of the violence in Somalia. The sentences did not solve the problem. Leaders in Minnesota’s large Somali community said in September, after an al-Shabab attack on a Kenyan shopping mall, that the group continues to try to entice their young men.

The Associated Press reported in June that 94-year-old Minneapolis resident Michael Karkoc commanded a Nazi SS-led unit that was accused of burning villages filled with women and children during World War II, and that he lied to immigration officials to get into the U.S. after the war. The Ukrainian immigrant refused to discuss the past, but his son denied his father’s involvement in any war crimes. In November, the federal prosecutor leading Germany’s probe said he had decided to recommend state prosecutors pursue murder charges against the retired carpenter.

The Minnesota Vikings broke ground on their sleek new stadium in December, following more than a decade of planning and lobbying to replace the unloved Metrodome. The public will cover roughly half the $1 billion cost while the NFL and Vikings cover the rest. Demolition is scheduled to begin in January at the Metrodome, where the Minnesota Twins won two World Series, but the Vikings never managed to top the NFC. The Vikings will play at the University of Minnesota until their new field opens on the Metrodome site in 2016.

Jim Carlson did a multi-million dollar business in selling synthetic drugs until July, when authorities shut down the Duluth head shop Last Place on Earth. In October, a jury convicted Carlson on 51 counts in a trial seen as one of the first major tests in federal court of how effectively authorities can combat synthetic drugs. Commonly labeled as “incense” or “bath salts,” the drugs have been difficult to regulate due to constantly changing formulas. Carlson, who vowed to appeal, is to be sentenced in 2014.

Kira Steger was last seen in public having dinner at the Mall of America with her husband, Jeffery Trevino. The St. Paul woman’s body was pulled from the Mississippi River in May. Her husband was convicted in her death and sentenced in November to 27 years in prison. Two other Minnesota women also went missing for months before their bodies were found. Danielle Jelinek, of Oakdale, was found in a Chisago County marsh in May. In December, a grand jury indicted her boyfriend for third-degree murder, accusing him of supplying the cocaine that caused her death. Mandy Matula, of Eden Prairie, was found in a shallow grave in Stearns County in October. Police believe her ex-boyfriend shot her in the head before killing himself outside the Eden Prairie police station a day later.

Minnesota regulators released a 2,200-page environmental review in December for a proposed PolyMet copper-nickel mine and processing plant. The project is expected to set the pattern for the handling of future mining projects in northeastern Minnesota, which has vast, untapped copper, nickel and precious metals deposits. The review, which described the project, its expected effects and efforts to eliminate or reduce those effects, set the stage for what’s sure to be a contentious struggle over permits in 2014.

Minnesota Orchestra conductor Osmo Vanska resigned in October, making good on his threat to quit if the orchestra management and musicians failed to end their contract impasse in time to save scheduled performances at Carnegie Hall in New York in November. The musicians have been locked out for more than 13 months. A six-month lockout of St. Paul Chamber Orchestra musicians ended in April.