NEW YORK — The Boston Marathon bombing was selected the sports story of the year Friday in an annual vote conducted by The Associated Press.

Two pressure cooker bombs exploded near the finish line of the April 15 race in an area packed with fans cheering the passing runners. Three people were killed and more than 260 injured, including at least 16 who lost limbs.

Authorities said brothers Dzhokhar and Tamerlan Tsarnaev, ethnic Chechens from Russia who emigrated to the United States as children, planned and carried out the bombings in retaliation for U.S. involvement in Muslim countries. 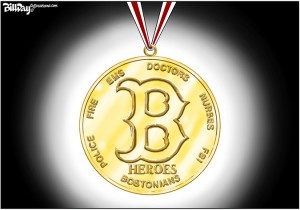 Ninety-six ballots were submitted from U.S. editors and news directors. Voters were asked to rank the top 10 sports stories of the year, with the first-place story receiving 10 points, the second-place story nine points and so on.

The marathon attack received 761 points and 67 first-place votes. It was also second in AP’s national/international story of the year poll.

The No. 2 sports story, Lance Armstrong’s admission of doping, had five first-place votes and 517 points.

The top five stories were grim: terrorism, performance-enhancing drug use, legal settlements, murder charges. The first on-field action came in at No. 6 — the Boston Red Sox’s worst-to-first World Series title, though even that was tinged by the city’s heartache less than seven months earlier.

The throngs of spectators lining the streets at a storied big-city marathon were once a wholesome scene of civic pride and friendly support. April’s attack came as a haunting reminder that the crowds at a high-profile event are also a vulnerable target. Bag searches and metal detectors were a common sight at games the rest of the year. As victims persevere on prosthetic limbs, the 118th edition of the world’s oldest marathon is set for the spring, with security undoubtedly heightened but runners determined to take part.

The disgraced cyclist was also the No. 2 sports story last year. In 2012, the U.S. Anti-Doping Agency stripped him of his record seven Tour de France titles, releasing mounds of evidence that he used PEDs to win them. In January, after years of defiant denials, Armstrong finally admitted it, telling Oprah Winfrey: “It’s this myth, this perfect story, and it wasn’t true.” 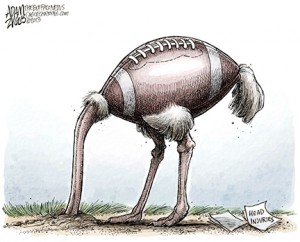 The NFL’s settlement of lawsuits brought by thousands of former players will cost the league $765 million but won’t end the turmoil over head injuries in football — or the litigation. The retirees, who had accused the NFL of concealing the long-term dangers of concussions, will be eligible for compensation for certain neurological ailments. The league did not admit to any wrongdoing after mediation resulted in a settlement in August.

Alex Rodriguez’s 211-game suspension was the longest of the 13 announced in August for players connected to a Florida anti-aging clinic accused of distributing banned PEDs. The Yankees’ slugger was the only one to contest the penalty, and the year ends with an arbitrator yet to rule. In July, Ryan Braun, the 2011 NL MVP who had previously denied using banned substances, accepted a 65-game suspension. 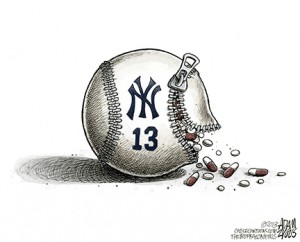 On Jan. 20, New England Patriots tight end Aaron Hernandez had nine catches for 83 yards in an AFC championship game loss to Baltimore. Just more than five months later, he was charged with murder. Prosecutors accuse him of shooting a friend to death on a secluded gravel road for talking to the wrong people at a nightclub. Hernandez awaits trial amid revelations of a history of violence by the player.

Boston’s 2011 season ended with a collapse and tales of fried chicken and beer in the clubhouse; 2012 ended with a last-place finish and 93 losses. New manager John Farrell and his bearded sluggers embraced “Boston Strong” and tied for the best record in the majors in a turnaround few predicted. With timely hits up and down the lineup throughout the playoffs, the Red Sox beat the St. Louis Cardinals in six games for their third World Series title in a decade.

The power came back on, and Baltimore held on. Ravens coach John Harbaugh beat younger brother Jim’s San Francisco 49ers 34-31 in the Super Bowl in an unprecedented sibling showdown. But the game will be remembered most for the 34-minute outage at the Superdome in New Orleans. Baltimore star linebacker Ray Lewis rode into retirement with a ring.

The Tigers’ turnaround from a 3-9 record to the national title game was stunning enough. Even more shocking was how they did it. A deflected 73-yard touchdown pass with 25 seconds left gave Auburn a 43-38 win over Georgia on Nov. 16. The play that ended their next game will go down as one of the most memorable in college football history: Chris Davis’ return of a missed field goal attempt more than 100 yards to beat No. 1 Alabama 34-28.

Heisman Trophy runner-up Manti Te’o struggled in Notre Dame’s lopsided loss to Alabama in the national title game Jan. 7. Nine days later, his name became forever linked to a most bizarre sports story. That tragic tale about his girlfriend’s death told over and over as the linebacker starred for an undefeated team? She didn’t exist. Te’o insisted he was duped into believing the woman he never met in person was real.

One more free throw or one more defensive rebound, and the San Antonio Spurs prevent Miami from repeating as champion. Instead, Ray Allen made one of the biggest shots in NBA Finals history, knocking down a second-chance 3-pointer with 5 seconds left to send Game 6 to overtime. The Heat won in the extra period and again in Game 7 to give LeBron James another title.