A work of art 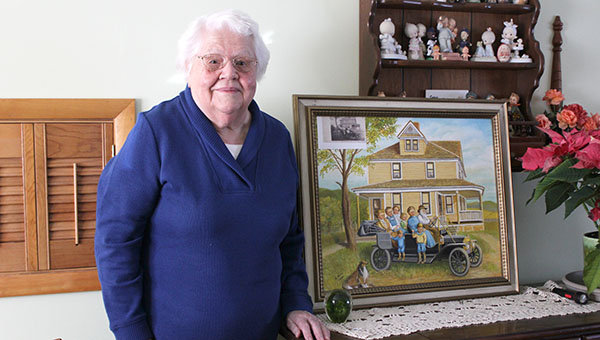 Agnes Boss stands with a picture she painted using an old photo of her ancestors. –Tiffany Krupke/Albert Lea Tribune

The longtime Albert Lea resident has been experimenting with art for as long as she can remember.

Her art will be on display at the Albert Lea Art Center during its annual All Member Show, which will showcase the art of its members.

Boss, who is the featured artist for this year’s show, is a longtime member and supporter. 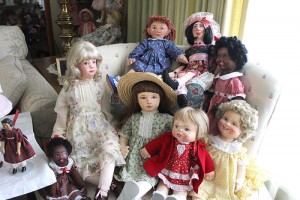 There are many dolls on display throughout Agnes Boss’s home.

Boss will exhibit a variety of works from her personal collection created throughout her artistic career.

Boss described her feelings on being selected as featured artist in one word – nervous.

Boss started drawing when she could hold a pencil. She spent many nights drawing. Her family owned one book, an agriculture book, and she and her brother often had contests to see who could draw the best.

She began painting with oil, acrylic, and water color.

Her brother, who was a few years older, did some woodworking, but Agnes wasn’t allowed.

“Every time I picked up a tool, my dad would take it out of my hand,” Boss said.

Boss dreamed of being an artist but was steered in the direction of teaching.

Being an artist wasn’t seen as a career possibility for a woman.

In college, she took Art 101, woodworking and toy making. Boss taught students in her class art once a week, figuring they could use it to make gifts.

Her art has remained a consistent hobby throughout her life. She enjoys painting, making dolls and making things from wood.

Her husband, Burt, was always supportive.

“I would be working on a project and find him standing over my shoulder,” Boss said. “He always encouraged my work.” 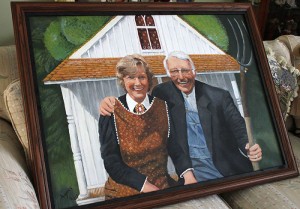 Agnes Boss painted this photo of her neighbor, Michael Cotter, and his wife, Bev.

Boss also did some carving and woodworking in the garage.

“I remember carving in the garage and making a pretty big mess, then hearing my husband tapping at the door asking when I was coming in,” Boss said.

She began making dolls when her daughters began bringing home doll magazines. She quickly grew busy with the hobby and attended many doll shows. She also repaired dolls.

Her husband purchased her a special tool to make the ball joint on the dolls.

Some of her dolls are made from sculpy – a mixture of palmer and clay, Boss uses.

Some of her cherished projects include a big baby doll, dolls modeled after wives of U.S. presidents and portraits of her family.

Many of her art projects end up as presents.

As well as the dolls for her daughters, Boss painted a picture of her neighbor, Michael Cotter, and his wife, Bev.

“When I give people a tour of my house, they always stop to look at the painting,” said Cotter, who lives right across the street from Agnes. “It is the highlight of my tour.”

“It went pretty easy,” Boss said of the painting. “I think God was with me that week.”

Boss has a story for every piece of art in her home. Many of her paintings are paintings of old photos.

One portrait, of her husband as a child, combines several photos of him. Boss also painted a portrait of herself as a baby – using the only photo taken of her at that time.

Though she is losing her sight, Boss still lights up when she describes her art.

Boss recently turned 90 but refuses to slow down. She still enjoys mowing the lawn, snow blowing and of course her art.

Boss wants to do another painting soon and will continue making dolls for the Freeborn County Historical Museum to sell.