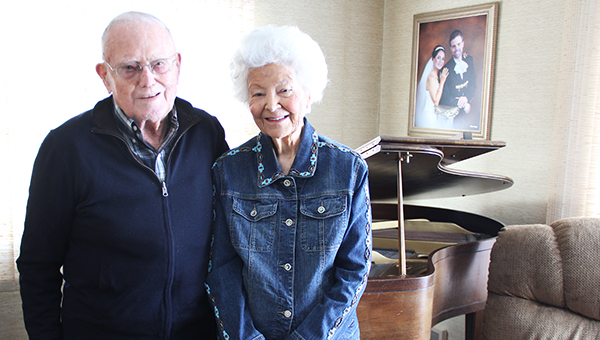 Clarence and Dorothy Schroeder stand in front of the piano in their home that they were married next to 70 years ago. –Sarah Stultz/Albert Lea Tribune

Both at age 93, Clarence and Dorothy Schroeder have been married for 70 years as of today. And they have some advice for newlyweds.

“You’re going to run into a few bumps once in a while. It’s not the time to throw up your hands and say enough with it,” said Clarence.

Though they have had their share of challenges — both now suffer from medical problems and Dorothy has dementia — Clarence said he thinks their quality of life remains high.

“We live in our own home, and I still drive my car, so I don’t think we have a lot to complain about really,” he said.

The husband and wife both lived on small farms near Fredonia, Wis., but it wasn’t until about 1941 that they met at a party and started dating, Clarence estimated.

On Jan. 16, 1944, a retired judge married them in Dorothy’s father’s house in Fredonia. Soon, Clarence was sent overseas to Europe during World War II. He returned safely, and the couple had their first child in 1950.

In 1951, they moved into the house where they still live today on Willamor Road in Albert Lea. 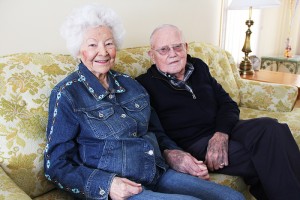 They had three more children — for a total of one girl and three boys.

“Your kids kind of knit things together,” Clarence said.

The husband said he worked for Universal Cooperatives for 37 years, and after he retired, he and Dorothy traveled all over the country and Canada.

Mark Schroeder, the couple’s oldest son, said he has learned love and devotion.

“Those two qualities have sustained my mother and father through 70 years of marriage,” he said. “A quiet love and steadfast devotion to their children also lead my parents to sacrifice whatever was necessary to support my sister, two brothers and me from infancy through college.”

Leslie Sturzenberger, the couple’s daughter, said she has learned characteristics of perseverance, commitment, curiosity and courage, among others.

“I’ve learned what it takes to build a home — not just a house,” she said. “My parents have been in the home they built since 1951 and, while we all have scattered across the country, we always find our way back.”

Son Lane Schroeder said he has learned hard work, self respect and how a person can exceed his or her potential.

Son Todd Schroeder said his family has been blessed by having parents — and grandparents to his children — who are from what has been called the silent generation and the greatest generation.

“Their dedication, devotion and sacrifices they have made to their children, grandchildren and others without expecting or wanting anything in return represent the very virtues subsequent generations should follow,” he said.

The family celebrated the anniversary during the Christmas holiday when they all gathered in Albert Lea.