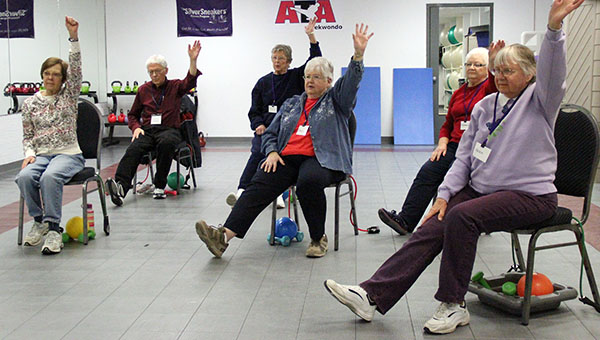 Participants in the Monday morning Silver Sneakers class at the Albert Lea Family Y do a stretching exercise at the beginning of their workout. The class is designed to increase muscular strength, range of movement and ease of daily living. –Drew Claussen/Albert Lea Tribune

After eating a bunch of big meals and holiday treats, many people make resolutions to lose weight in the new year, and the Albert Lea Family Y has a free option to get everyone started.

The Family Y is offering free holiday fitness classes until Saturday. The classes have been going on since Dec. 16. Fitness Director Susie Hulst, who put all the classes together, said this was the third year free classes were offered.

“We get kind of a new crowd in at this time because a lot of people are busy during the holidays,” Hulst said. “Some people are gone, but we get some people who have never come before, so it’s kind of a shift in who’s coming.”

Hulst said the reason free classes work out so well during the holiday season is because there is a break in between sessions. A new session starts Monday and runs until Feb. 23.

There were 19 classes offered for free, and they were scheduled throughout the day. There are land, cycling and water classes. The Family Y is closed today, but there will be nine classes offered on Thursday and six on Friday. An instructor’s choice session will run from 8:55 to 9:55 a.m. Saturday. A full schedule can be found at ymcaal.org.

Hulst said the Family Y does see a spike in new members in January, but it doesn’t only last for the first couple weeks of the new year.

“Our membership picks up in January, and February too,” Hulst said. A good way for people to make sure they keep their fitness resolution is to join a fitness class, according to Hulst.

“It depends on the person, but I think for a lot of people they like that comradery of going with a friend or seeing someone they know,” Hulst said. “Having the commitment, you know, ‘it’s this many days a week and I’m going to make those days because so-and-so expects me to be there.’”